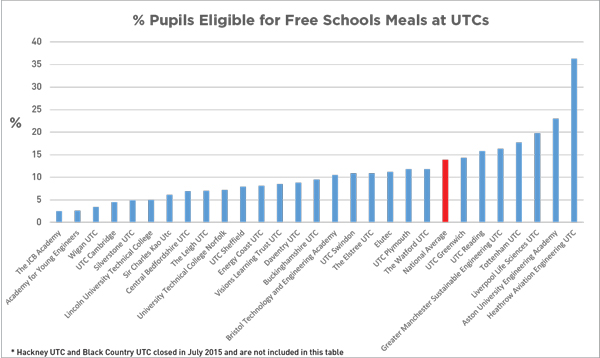 Critical evaluations of the impact that vocational free schools — also known as university technical colleges (UTCs) — would have on nearby schools are inconsistent and in some cases inaccurate.

Impact reports on UTCs opened in the past three years — and finally released this week by the government — reveal concerns about pupil numbers at dozens of schools near the institutions.

The government is forced under the law to commission the independent reports and is supposed to take into consideration their findings before granting final funding for the new schools.

But analysis by Schools Week in two areas of the country where UTCs opened show the impact assessments are often inaccurate.

Before UTC Oxfordshire opened in Didcot this September, the impact assessment warned three schools could see “high” levels of impact, and eight others could see a “moderate” level, as it was assumed pupils would transfer from the schools.

Almost a quarter of the 90 pupils starting at the UTC this year arrived from one nearby boys’ school, St Birinus, yet this was considered by the government to be only at risk of moderate impact.

The remaining pupils arrived from 17 different schools, and did not put any of the “high” impact schools at risk.

Oxfordshire County Council told Schools Week it expected the impact on places at existing schools to be “relatively limited”.

A spokesperson added: “The population in Didcot will expand significantly in the coming years with the growth of the Great Western Park development. A further 1,200-place secondary school is being planned to address this need.”

In Manchester, an impact report completed ahead of the opening of the Greater Manchester Sustainable Engineering UTC claimed four schools in the Oldham area would be affected.

One year on, an Oldham Council spokesperson said the UTC had drawn pupils from “all 12 secondary schools” in the area, adding: “It has not been pupils from one particular school or one type of school.”

The UTC had “relatively low” numbers, with 47 pupils currently in year 10 and the same number in year 11. “Due to the significant pressure on school places we have in Oldham, the impact on schools has been minimal. As soon as a pupil leaves to go to the UTC, we are able to allocate another pupil a place at that school.”

The latest data shows more than two thirds of the 30 UTCs open last year had fewer pupils eligible for free school meals (FSM) than the national average for secondary schools.

The UTC with the highest rate of FSM eligibility, Hackney (37.8 per cent), closed this summer after poor Ofsted ratings and financial difficulties.

Mary Bousted, general secretary of the Association of Teachers and Lecturers, questioned the rationale in some of the documents.

She pointed to one report stating that Sheffield UTC was expected to have a “high” impact on nearby Sheffield Springs Academy, which has a 20 per cent surplus of places. “The report’s rationale for opening a UTC near a school which is only 80 per cent full is that, although this school has a satisfactory Ofsted rating, there is a lot of room for improvement and its GCSE results aren’t very good.

“The implication is that the UTC will provide an alternative to this failing academy for local students. Is the government using UTCs to solve the problem of failing academies?”

Charles Parker, chief executive of the UTCs umbrella organisation, the Baker Dearing Educational Trust, said: “UTCs are sub-regional which means their catchment areas are typically much larger than for other new schools.

“They generally recruit from a large number of schools and their distinct STEM-related offer usually appeals to a small number of children in each school.”