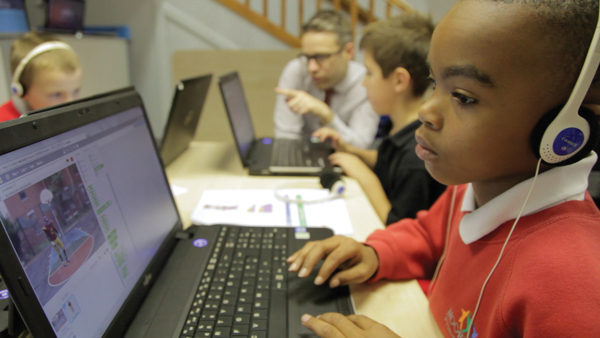 Schools spend somewhere between £500 million to £1.5 billion every year on computing kits and software, with more than 14,000 teachers employed to teach children how to use them. In the first of a six-part series focusing on technology in schools, Jess Staufenberg looks at the shift towards the teaching of computing – rather than ICT – and what it means for schools

It is a year since computer science was added to the national curriculum. Back in 2012 Michael Gove decided to phase out ICT with its Excel and PowerPoint obsession in favour of a new “computing” qualification focused on how computers work.

“Computer science” appeared on the curriculum last September, from primary school through to GCSE and A-level. Ministers also gave the GCSE the special accolade of being a “core academic subject” within the English Baccalaureate (EBacc), effectively announcing its status as a “rigorous”, non-vocational body of knowledge that it felt was critical to a student’s education.

The media focus on practical “coding” skills as the point of computing was misleading, experts said — really, it was about teachers imparting a new academic world called “computational thinking”.

The history of the lobbying that brought computing to the curriculum involves several actors. In 2008, pressure group Computing at School produced a report saying the IT GCSE was putting pupils off the computing A-level.

Meanwhile, research commissioned by the Department for Culture, Media and Sport in 2011 warned that the video games and visual effects industries were struggling for skilled recruits and recommended a better qualification in school.

Schools minister Nick Gibb said the inadequacy of IT was clear. A founder of Computing at School, one-time IT teacher Simon Humphreys, said: “We were encouraging children to use computers as black boxes where magic happens. Actually, it’s not magic, it’s engineering. It all needed backing by some of the theory about the hardware used to run them.”

Out went a focus on using computer products, and in came a focus on programming. Then Michael Gove and his team at the Department for Education (DfE) collaborated with Google, Microsoft and the Royal Academy of Engineering to produce a programme of study in which children learned “how to design and write programs to accomplish specific goals” at primary level and “how to use and evaluate computational abstractions of real-world problems” at secondary. Four hundred “master teachers” would train teachers and provide resources through £3 million of funding given to the British Computer Society (BCS), while sister company Computing at School was given £1 million to create online resources sent to every primary and secondary head. Other non-profit providers, such as London-based Code Club, pitched for funding to train teachers — all geared to growing a Network of Teaching Excellence in Computer Science, which is growing still. In total more than £4.5 million has been spent getting this initiative off the ground.

The drive reflects the DfE’s belief that computer science is a “core academic subject”, according to Mr Gibb. The EBacc performance measure ranks schools in league tables according to the number of GCSE passes in the “core” subjects of English, maths, history or geography, the sciences and a modern language. The expectation is that 90 per cent of young people will study all these subjects until 16. As one of these “core academic subjects”, computing has risen from part-time, part-joke IT lessons to nothing less than the new “fourth science”.

“It’s within the science block of the EBacc, which is a very clear signal that it’s important,” Mr Gibb said. “It means it is on a par with the fundamental elements of the education system.”

GCSE computing is on the rise. Just 4,021 took it in 2013; two years later that has increased seven-fold to 33,500. But some teachers claim they have been abandoned to tackle a whole new subject entirely by themselves. Mr Gibb said the hands-off approach reflected a belief in teachers’ capacity to innovate. “We’re trying to give the school system much more autonomy, so we’ve moved away from this national strategies, cascading-out approach, with a new missive from the DfE each month,” he told Schools Week. “But when we are aware that we are putting a significant new demand on the teaching profession, we are providing funding to enable the sector themselves to innovate.”

Yet making computer science a core subject is a powerful decision that was taken on behalf of schools. It is the delivery, not the decision, that has been left up to schools.

Leah Dobson, assistant head at Water Hall Primary in Milton Keynes, said she and her staff could find no master teachers in their area. “The government should deliver some kind of training to all schools. There’s so many websites you can go on, but it’s not consistent.”

Chris Bateman, head of technology and enterprise at Wheatley Park School in Oxfordshire, said master teachers were difficult to track down. “When you find them, I hear it’s great. But actually finding them is very hard. Without my own network, I don’t think we’d have done that well.”

Lauren Hyams, head of teacher training at Code Club, said its volunteers had trained about 1,000 teachers but given the roughly 30,000 primary schools in the UK, “that is a drop in the ocean”.

There also appear to be no plans in place to assess the impact the training. Code Club chief executive Clare Sutcliffe said face-to-face training was most effective but expensive. “It tends to be online and books, whereas we really believe that face-to-face training is best,” she said. The impact of their efforts are not known; the £44,000 funding the club received from government did not include money for follow-up.

“We don’t keep in touch after we’ve
trained them. We ask them for anecdotal feedback about our training sessions,” she said, “but we don’t have surveys showing particularly what’s going on back in the classroom.” If, as the organisation says, this is the biggest face-to-face training operation going on in the country, then teachers really are being left to get on with it. Mr Gibb confirmed that no assessment of training for teachers was in the pipeline.

Simon Humphreys, a founder of Computing at School, which drives many of these initiatives alongside the BCS, agreed the various efforts across the country were not being adequately tracked. “I understand Ofsted can do what they call aspect surveys. We have tried to encourage them to do one on this, but we haven’t been very successful.”

Here, however, is the other obstacle to tracking the progress of teachers and pupils. Heads of department have expressed doubt that computer science grades — which Ofsted would measure — truly reflect the practical skills of pupils. Mr Humphreys, like Mr Gibb, said he was “absolutely convinced that computing is an academic discipline”. And as an “academic” discipline, only 20 per cent of the overall grade is based on coursework, with no time-pressured, practical programming exam. The result, Mr Bateman said, will be that students who are good communicators will get better results than his best coders. “I have a student who is a fantastic coder,” he said. “But he’s not going to do very well at GCSE because his explanation of what he’s doing, which is what the exam board wants, isn’t at the right sort of level.”

The drive to “academise” computer science has been at the heart of attempts to make it a core part of student learning. But the government expects students to meet the new demands without consistent support. The emphasis on “computational thinking” as it stands may produce good communicators but not necessarily industry-ready designers. Teachers appear enthused by this new introduction, and the computing revolution is still in its early days. Perhaps, however, being light-fingered on delivery ought not be confused with giving schools decision-making “autonomy”.