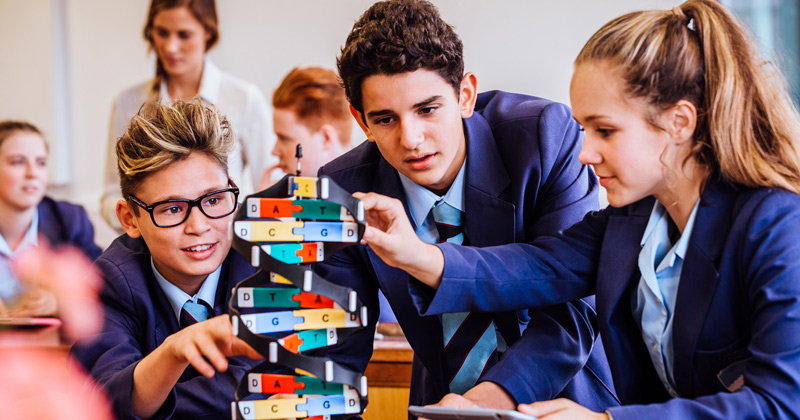 Helping students work well together is just as important as the end result, explain Ruth Johnson and Ayesha Ahmed

In a world facing complex challenges, from climate change to Brexit, teamwork and problem-solving are ever more important skills for young people to develop. But with zero-sum social-media rows too often the norm in public debate, how can we encourage effective collaboration in the classroom?

As part of a study into collaborative problem-solving, researchers at AQA and the University of Cambridge Faculty of Education set out to explore groupwork among young people. We aimed to move beyond a general sense that cooperation is productive and identify in detail what good collaboration looks like, and how teachers can assess it formatively.

We worked with 14- to 15-year-olds in schools in the Manchester and Cambridge areas, giving them multistage problem-solving tasks to tackle in groups of three. We recorded them and analysed their discussions, looking for instances of different types of talk: proposing new ideas, for example, or building on the ideas of others, justifying ideas or resolving disagreements with reasons.

As the groupwork developed, we asked teachers and assessors to observe and comment on it. We then looked at what the students in the better-performing groups were doing differently.

What we found was that the key to collaborative classroom work was balance. When a problem needs to be tackled, it is the balance of contributions and not simply a strongly promoted opinion that is important.

Our study showed that if all participants are contributing roughly equal amounts of talk to a discussion, and if they’re responding to each other by building on ideas and taking them further, they can solve the problems set for them more easily. What’s more, if students explain their ideas – rather than simply asserting them – and invite ideas from others and ask each other questions, the group does better. Some specifics of the language are important, too – for example, the use of “shall we” rather than “I think” was common in the better-performing groups.

None of this happens easily

Also critical are the more social elements, such as ensuring everyone is involved, keeping the group moving forward and bringing humour to the task. Conversely, in discussions where things didn’t go so well, we saw evidence of students taking control or taking a position of authority, building on their own ideas and dismissing the ideas of others, or deferring to another as the authority. Whenever any students in a group made a very low or high number of utterances relative to the rest of the group, there was less progress on the task – the opposite of balance.

None of this happens easily. Groupwork has to be planned well and groups have to be selected carefully. It should happen in conjunction with other forms of learning, including direct instruction (again, a balance is a good thing), and it has to be done in an informed way – teachers and learners need an explicit understanding of what good participation in a group task looks like.

The materials that we have developed out of our research  include descriptions and exemplars of good participation, as well as ideas for tasks and feedback. We hope that they will enable teachers to answer questions such as: “What feedback should I give this student to enable them to get better at this?”

And, in turn, we hope this will encourage schools to teach not just the subject knowledge needed to complete a collaborative task, but also the skills needed to participate in such tasks.

As one teacher in our project put it: “We do a lot of groupwork but we normally assess the finished piece rather than the activity, so I’m going to look at… assessing the teamwork and the output separately.” This approach enables students to get better at working with each other and to be better prepared for the world beyond school.