Schools are letting teachers take their planning, preparation and assessment (PPA) time at home, banning work in the staff room and cutting the hours of senior leaders, all in the name of staff wellbeing and flexible working.

But researchers believe more still should be done to “normalise flexible working in schools”, and have launched a project to help teachers and their employers catch up with other sectors.

At the Chartered College of Teaching’s second annual conference, held in London on Saturday, several speakers and panellists focused on issues of workload and staff wellbeing.

And while some leaders shared examples of how flexibility was helping schools and their staff, others spoke of the need for change, especially in relation to encouraging younger women to return to the classroom.

Lucy Rose, a participant in Teach First’s innovation series, explained to delegates how through her flexible teacher talent project, she and her research partner Lindsay Patience hoped to find ways to keep teachers in the profession who might otherwise leave for good. 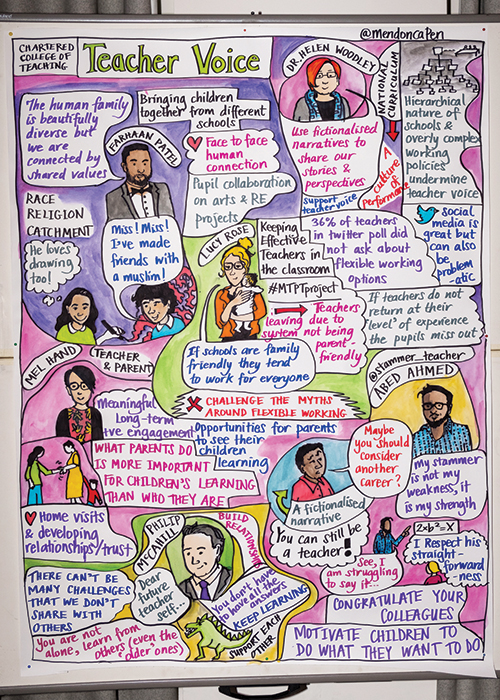 “There is a well-documented recruitment challenge in education, and we’re interested in this group of women aged 30 to 39. 6,000 of them leave the profession every year, and there’s not much data on what happens to them,” she said.

“They aren’t the only people for whom flexible working would be beneficial, but they are nearly 30 per cent of the teachers leaving the profession, and it does suggest that teaching somehow, whatever people believe on the outside, is not compatible particularly with having a family.”

Rose also warned that the education sector is “really behind” on flexible working.

“In other sectors, flexible working has proved to be extremely effective: up to an 80-per-cent increase in productivity in some sectors. If you translate productivity in another sector to pupil outcomes in education, the potential is huge.”

Speaking to Schools Week after the conference, Rose explained that her project will initially be trialled in schools in and around the London Borough of Wandsworth.

For teachers, it will focus on things like helping them with their “business case” and to find job-share partners. For schools, the project will support and train leaders to “normalise” flexible working, and with logistics such as timetabling, management, ethos and culture.

In other sectors, flexible working has proved to be extremely effective

Rose’s focus is not just on younger teachers returning to the classroom after starting a family, though. She is interested in how schools can support staff at all stages in their careers, and save money in the process.

For example, she told conference delegates of one school in Wandsworth where the senior team was offered reduced hours so they could continue to work but spend more time with their families.

“Anything to do with work went out of the staff room,” said Ceri Hathaway, headteacher of Brooklands Primary School in Derbyshire. “It’s literally just settees, music, refreshment areas, tables, just for people to go in there and have that sort of escape lounge feel in there. That minimised the amount of space where teachers could go and work.”

At the same time, staff were given the choice to take their PPA time at home, and told that time away from school during working hours could also be spent on personal activities, as long as standards were maintained and tasks were completed.

“It’s not about ‘you’ve got to stay in school, you’ve got to go home’. People have got that flexibility, and I think there’s also that thing about professional relationships, where people feel valued in terms of the fact that, as a senior leadership team, we trust them. It’s not about keeping tabs on them.”

Alison Peacock, the Chartered College of Teaching’s chief executive, said the notion of flexible working, and “ways of thinking intelligently about how we best thrive as a profession”, was an important part of efforts to “shift the narrative away” from workload issues. 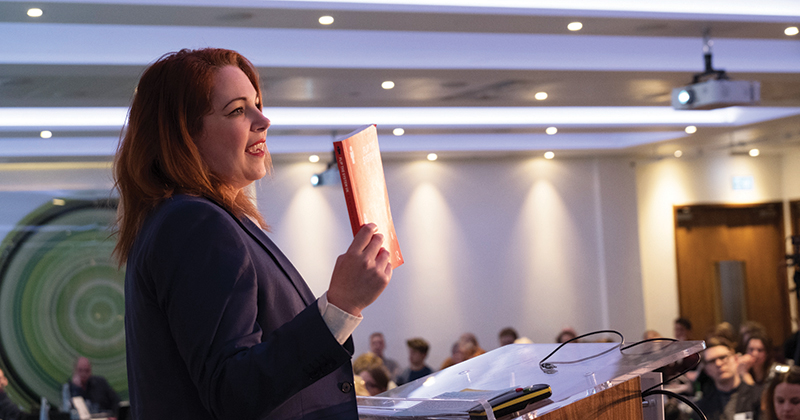 Teachers should not have to choose between their career and having a life, according to a maths teacher and author who quit the classroom “exhausted, stressed, frustrated and absolutely furious”.

Lucy Rycroft-Smith (pictured above), co-author of ‘Flip the system UK: A teachers’ manifesto’, told the conference that she had been “forced into action and activism” by threats to her rights as a teacher, and encouraged others to speak up.

In her book, Rycroft-Smith tells teachers it is “okay to be fallible, and okay to be different”, and warns it is both “unreasonable and unworthy” to expect teachers to “give up their life for a calling” and dedicate their time and energy “solely” to the children in their care.

The book also calls on teachers to put aside their differences over different styles of teaching and stand together.

“Right now, either you or somebody you know in teaching is literally dying because they’re at the bottom of the system,” she said. “Please stop calling them a moron for using learning styles and help.”

Rycroft-Smith left teaching in 2016, when she found herself “exhausted, stressed, frustrated and absolutely furious that I had no voice and no agency”.

“In 2016 I took a lot of things for granted, and a political hurricane of idiocy took my breath away. Threatening the rights and the premises I thought were universal has forced me into action and activism. In teaching, this hurricane, this perfect storm, is upon us too, and it is forcing us to act.

“If we want the trust and the agency and the pride, we must claim it. Sometimes we must resist. As we’ve already heard today, sometimes, we must say no. We might even have to be difficult or demanding.”

Pupils with special educational needs and disabilities (SEND) are being excluded by education policies like the times-tables test, experts have warned.

Panellists told the Chartered College of Teaching conference that the language the government uses when talking about needing “all pupils” to reach certain standards has caused a stigma around SEND, and that special schools are seen as a demonstration of parental failure.

Nancy Gedge, a consultant teacher with the Driver Youth Trust and an author who has written extensively about her experiences of bringing up a son with Down’s syndrome, said special schools needed to be seen as operating “within an inclusive system”.

“I was frightened of specialist school,” Gedge said. “I really felt as a parent it was a failure of me as a parent for my child to go to a special school. It’s really not; it’s just a school.

We need to bring specialist settings into the conversation about inclusion

“I think that we need to bring specialist settings into the conversation about inclusion. Because frankly, without them, some children would be denied an education at all.”

The government announced last week that a trial of its new times-tables test for year 4 pupils will begin in around 290 schools in March.

Gedge said the language used around the test – which the government hopes will help it reach its goal of having every pupil know their times tables up to 12 by the end of primary school – is problematic.

“I do get cross when I see ‘100 per cent of children must pass the times tables test’ and things like that, because I think ‘hang on a minute. I’ve got one sitting at home who in year 4 would not be passing that times-tables test no matter what the state of his teaching’,” she said.

“And that’s not a problem, that’s human diversity. I think we do need to challenge the whole language of ‘all’ to actually include ‘all’ children, and that includes specialist settings.”

Delegates were also warned that attempts at including certain pupils with support needs in mainstream schools was having the opposite effect.

“How often do we see the same children going out for interventions? It’s the same kids that need the support, quite often in reading and writing and phonics and maths, and at what cost?” said Maria Constantinou, an associate headteacher and inclusion leader at St. Mary’s C of E Primary School in London’s East Barnet.

“These children are coming out of the classroom, they’re missing out on that high-quality teaching experience, and spending a lot of time with teaching assistants. Rather than being included are actually being excluded from the place that they should be the majority of the time.”