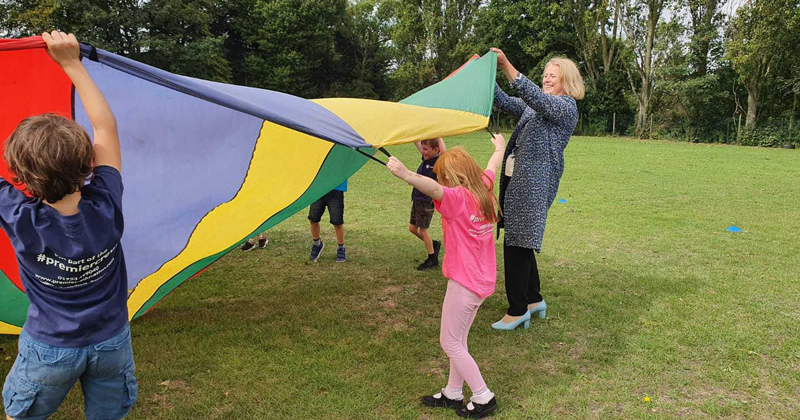 The government must allocate “multi-year funding” for its holiday activities and food programme, previous recipients said after the announcement of a £220 million expansion to the scheme.

The extension of HAF to all areas in England and into the Easter and Christmas holidays next year was announced on Sunday, following mounting pressure on ministers to extend free school meals over holidays.

A separate £170 million Covid winter grant scheme between this December and March will allow councils to help families struggling with food and bills.

But the expansion cash is only confirmed for one year, with a decision about future years not due until the next spending review.

The government has been criticised for repeatedly renewing the pilot and pledging funding on an annual basis, preventing any long-term planning.

The HAF programme was trialled in 2018 with £2 million split between seven providers to run schemes in the summer holidays.

It was expanded in 2019 with £9 million for 11 schemes, although an initial plan to extend the scheme to Easter was abandoned.

The pilot ran again this year, with a further £9 million for ten projects in 17 local authority areas.

The Department for Education said it hoped to reach 50,000 pupils in 2019 and 2020, but an evaluation report on the 2019 pilot by the consultancy firm Ecorys has still not been published.

An evaluation of the 2018 pilot found that although at least 18,200 pupils attended at least one session, only 13,000 attended more than one.

Vicky Ford, the children’s minister, said this week that the report on the 2019 pilot would be published “in the near future”.

Despite the impact of Covid, organisations that ran schemes this summer reported a successful year.

In Hampshire, The Romsey School Academy and Park Community School teamed up to run pilot schemes in 2019 and 2020.

This year, more than 7,600 children attended clubs in the county over four weeks, with a focus on family activities. A hot meal was served each day.

Jan Lefley, one of the coordinators, told Schools Week the involvement of families as well as children was a “big part” of the scheme’s success.

“You can’t change what happens inside a child’s home by just working with a child. The kids in school know what healthy eating is, they know what they should be doing, but when you go back into a home where there isn’t a lot of money, that child is not going to have an impact on that.”

Lefley believes the government should pledge multi-year funding for the HAF programme, but said tackling poverty in communities like hers was “about more than just feeding kids”.

“We have to change what we’re living in and how we’re operating. I’ve been doing this for 40 years and I am still coming up against the same thing time after time.”

In the south London boroughs of Lambeth and Southwark, the Mayor’s Fund for London ran activities and food programmes for more than 4,800 pupils this year.

Clara Widdison, the head of social inclusion at the charity, agreed that multi-year funding was needed, with “long-term investment into delivery areas”.

The government has said the £220 million expansion money will be shared between councils based on the participation rates in the pilots. Further details on the delivery model and funding would come “shortly”.

But some areas might need more help because provision was patchy.

“In London we have boroughs that have next to no provision,” said Widdison, who revealed her charity was turned down for funding in 2019 because it was “trying to go into a borough that had little existing provision”.

“The basis of our bid was that we would set up that infrastructure, we would develop these organisations. But of course, six weeks is a very short period in which to do that and to establish a long-term network, which is why we are asking for multi-year funding over a committed period of time.”

In Gateshead, the local council was given funding in the 2019 and 2020 pilots, but was able to build on holiday provision that had been in place for several years.

Ian Stevenson, who led the schemes for the council, welcomed the government announcement, but said there was “still a long way to go to help our residents out of poverty”.