Schools should be “held responsible” for the pupils they exclude, the children’s commissioner for England has warned, as figures show gang members are five times more likely to have been thrown out of school.

A new report from Anne Longfield, the children’s commissioner for England, warns there is “extensive evidence linking school exclusions with gang involvement”. The report estimates that 27,000 children in the country identify as gang members.

It also warns that some alternative provision for excluded pupils has become “gang grooming grounds” where pupils are exposed to other gang members, and repeats a Local Government Association claim that pupil referral units are “viewed as the place where already vulnerable young people get first hand exposure to and experience of crime”.

The report, published today, urges the government “to be clear that child criminal exploitation is a national priority” and set out “clear expectations” for all organisations who work with children, including schools, as to their role in countering it.

It said the Department for Education should respond to the forthcoming Timpson review of exclusions “by ensuring that schools realise the safeguarding implications of excluding children, and are held responsible for these.” 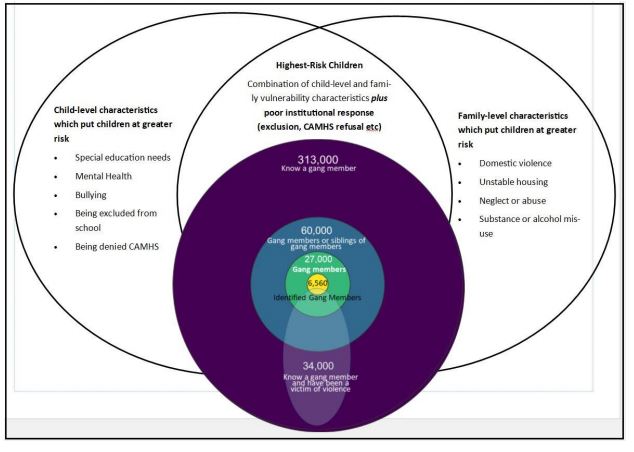 Schools Week revealed earlier this month that Edward Timpson’s review will call for the results of excluded pupils to continue to count towards the league table position of schools that exclude them. The former children’s minister is also expected to urge the government to make schools responsible for commissioning “high-quality and safe alternative provision”

Longfield’s report, meanwhile, said that while involvement in gangs often leads to exclusion, it is “equally important to recognise that the act of excluding a child in itself makes that child more vulnerable to gang violence”.

“Schools have a range of safeguarding responsibilities, which they discharge within the school or by notifying other agencies. All this is lost when a child is excluded or off-rolled.

“Action needs to be taken to combat schools who persistently exclude or off-roll.”

According to the report, children in gangs are 55 per cent more likely to have experienced a mid-year school move in the 12 months prior to their assessment by children’s services than other children, and five times more likely to have been permanently excluded in the previous academic year.

The number of permanent exclusions increased by 67 per cent between 2012-13 to 2016-17, and has almost doubled among primary schools. 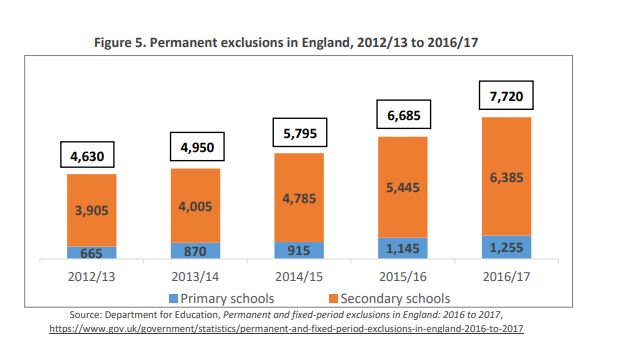 The report found that gang members are 95 per cent more likely to have social, emotional and mental health issues identified as a primary special need when compared with other children assessed by children’s services. However, just 20 per cent of gang-associated children with special needs have a statement or education, health and care plan which warrants extra funding, compared with 30 per cent of other SEND children assessed by children’s services.

Gang associated children are also 77 per cent more likely to have their mental health identified as a factor at assessment by children’s services, but the report said schools have found “young children are routinely turned away from CAMHS [child and adolescent mental health services] because they are not deemed to have a diagnosable mental health condition, even if they display extreme symptoms”.

The report said children become most vulnerable to gangs when they “fall through the gaps in the system”, including school exclusion or missing SEND support.

“Schools, children’s services, police and the NHS need to be working together proactively, not passing children from agency to agency.”