Free schools supported by a premiership rugby team and a major broadcaster are among those due to open this week, the education secretary has announced.

Fifty-four new free schools will open their doors today, offering places for around 40,000 pupils. A further six schools are expected to open later in the 2018-19 academic year, taking the total to 60.

Although this represents a slight improvement on recent years – 55 free schools opened in 2017-18 and 58 opened in 2016-17 – it appears to leave the government short of its manifesto commitment to build “at least 100 new free schools a year”. However, the pledge was vague and it remains unclear whether open free school projects or completed builds will count towards the target.

I want to create new, great schools where they are needed most and give parents greater choice when looking at the schools that are right for their children

Just 180 new free schools have opened in the past three academic years. This year’s additions will take the total to 240, meaning the government would have had to open a further 260 free schools in the next two years to reach the target of 500 new free schools set at the 2015 election.

According to government documents, there are still 325 free school projects “in the pipeline”, though this includes the 60 due to open this year. It is not known when the remaining 265 free schools are slated to open.

Among them are 22 primary schools, 21 secondary schools, eight all-through schools, two 16 to 19 institutions and one UTC, which caters for 14 to 19-year-olds.

The projects include Saracens High School in Barnet, an 11 to 18 secondary school with 1,130 places run by the Saracens Multi-Academy Trust, which includes Saracens Sport Foundation and Middlesex University.

In Hounslow, another London borough, a group of headteachers have teamed up with Sky to deliver in-school and extra-curricular activities in sport, media and technology at the new Bolder Academy, a 1,150-place secondary school and sixth form.

Meanwhile, Red Kite Special Academy in Northamptonshire will provide special provision for 100 pupils with severe learning difficulties and on the autistic spectrum. The school is part of the Kingsley Learning Foundation Trust.

However, just one University Technical College will open this year, down from five last year and 11 the year before. It follows a tumultuous few years for the technical institutions, many of which have struggled to attract enough pupils to be financially viable.

The college, which like its counterparts across the country will offer education for 14 to 19-year-olds, has been set up in partnership with the University of Sunderland, Accenture, Ubisoft and Newcastle-upon-Tyne NHS Trust.

Damian Hinds, the education secretary, said free schools have for years been “leading the way” on giving parents greater choice.

“The new schools opening their doors this term will build on this record, bringing in the likes of Saracens Rugby Club and Sky to provide pupils with excellent sports activities and classes on cutting edge media technology,” he said. 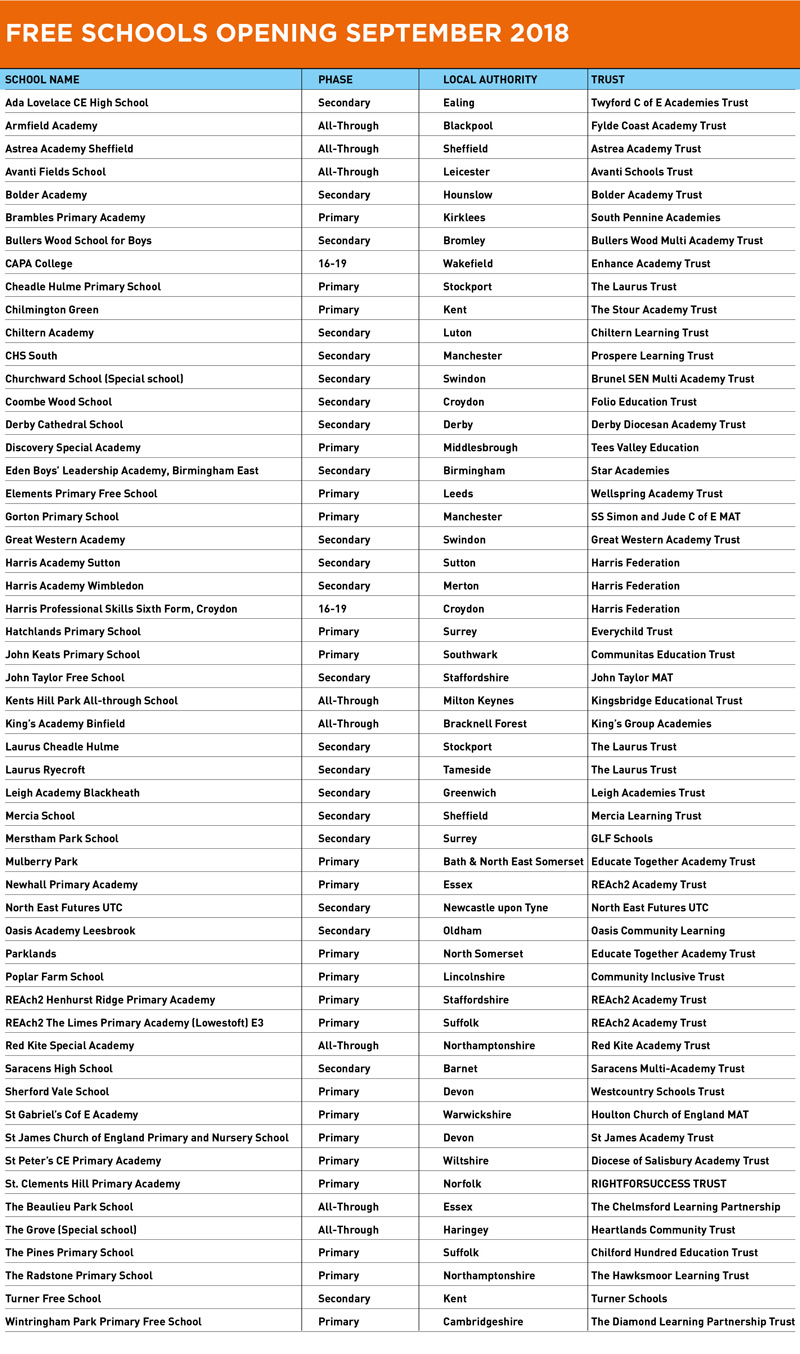