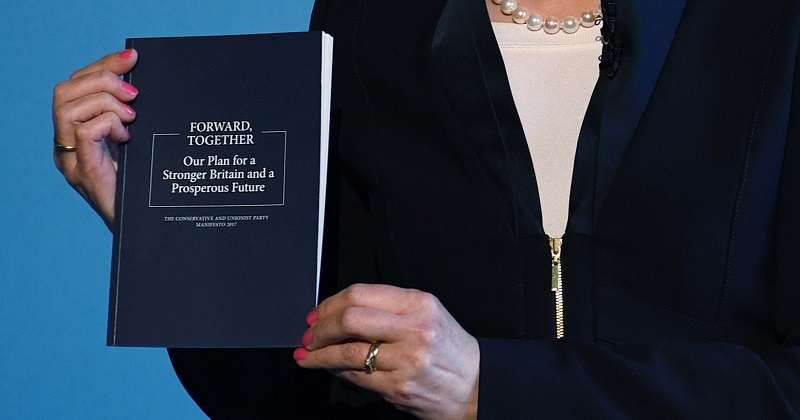 The Conservative Party’s manifesto has been launched by the prime minister Theresa May in Halifax, West Yorkshire today.

The 84-page document sets out the party’s vision for the next parliament, including what it will do for education.

This is a change from the 2015 Conservatives’ manifesto which pledged to open 500 new free schools over the course of the 2015-20 parliament – a target the government looked set to miss before the election was called.

It is unclear from the language whether the party intends to build and open 100 free schools per year, or if laid bricks would be enough.

(We also guess that free schools in buildings that already existed – such as converted offices – will also count).

2. Prohibit councils from creating any new places in schools that have been rated either ‘inadequate’ or ‘requires improvement’ by Ofsted

This is likely to be unpopular with councils under pressure to create school places to accommodate population growth.

Last year, research by the New Schools Network revealed that 113,000 new school places had been created in schools rated inadequate or requiring improvement in the previous five years.

Universities sponsoring more schools was one of the policies set out in the government’s consultation on selective education last year.

That consultation response has still not been published.

The proposal has not been popular with universities, with some claiming their institutions are not well-placed to look after state schools.

4. New funding to open a specialist maths school in every major city in England

This builds on an announcement from ministers in January that the government wants to create more post-16 specialist free schools across England.

It is part of a bid to address regional imbalances in the proportion of pupils studying maths at A-level.

The government and its supporters have previously spoken of the need to build on the success of institutions like the King’s Maths Schools, which saw all its pupils achieve either an A or A* in maths A-level last year.

Another policy from last year’s consultation (which hasn’t been published) and relates to the current 50 per cent cap on faith-based admissions for over-subscribed free schools.

Theresa May has argued the cap is unfair, and she wants to lift it. The proposal has been criticised by humanists, who claim it will lead to increased segregation.

Faith schools have welcomed the plan, claiming it means they can now meet parental demand for thousands of new places.

Another one from the schools that work for everyone consultation. The Conservatives say they will work with the Independent Schools Council to ensure the involvement of 100+ independent schools.

The party also says it will keep the option of changing the tax status of independent schools if progress is not made open.

However, analysis of the improvement records of schools already run by private schools challenges the government’s assertion that the institutions boost standards.

7. Lift ban on selective schools – with conditions, such as allowing pupils to join at ages other than 11

As expected, the pledge is to overturn laws banning new selective schools. By putting it in the manifesto, the Lords will not be able to block it.

No other conditions are mentioned.

The Conservatives will review admissions to “overcome the unfairness of selection by house price” but says it will never introduce a mandatory lottery-based school admissions policy.

9. Expect every 11-year-old to know times table off by heart

They were initially due to be introduced in May 2017.

However, it was revealed last July that primary schools would not be expected to administer the tests this summer.

There had been speculation the tests would be scrapped; this suggests the Conservatives would like to keep them.

This is a fairly vague point in an otherwise pretty clear set of policies.

The Conservatives do not say how they intend to improve schools’ accountability at key stage 3, just that they want to do it in order to “maintain progress as children go through secondary school”.

The pledge has sparked speculation the Tories may be preparing to bring back SATs tests for 14-year-olds.

The government consulted 18 months ago on having 90 per cent of children study the EBacc subjects at GCSE.

The response to that consultation has so far not been released.

Sources close to the process say that’s because there aren’t currently enough teachers in some subjects – particularly modern languages.

Moving to a 75 per cent target means the government has more time to redress the balance of teachers in different subjects (which it already is doing – see Schools Week story tomorrow!).

Some academies have already started forming their own curriculum (again, see more in Schools Week tomorrow); this money will enable other groups to join in.

One hypothesis on how this links to primary assessment is that reading and writing tests might start to include knowledge from other subjects, such as history and geography, to avoid a narrowing of the curriculum (which may be what is meant by “teaching to the test”).

13. Consider how Ofsted can give parents more information on what their children are being taught

‘Consider’ is always a slightly strange commitment. This one is especially strange because Ofsted already examine the curriculum taught in schools, and only visit periodically, so are not best placed to give parents more information when curriculums change.

Also – super nerdy detail – the School Information Regulations 2012 state that schools are supposed to put the content of their curriculum for each subject on their website.

A simple way to implement this policy would be getting Ofsted to check that the regulations are being met.

So far £1 billion has been spent on bursaries to get people into teaching.

In shortage subjects like maths they are worth as much as £40,000 per year.

Unfortunately, the government doesn’t know if they are effective or not.

15. Forgiveness on student loan repayments while teachers stay in the profession

This policy was mooted by right-wing think-tank Policy Exchange in 2015 – who tried to get it into the last general election manifesto.

The pressing teacher shortage has likely put pressure on the government to include it.

What is not clear is whether the loan forgiveness means a teacher would not need to pay loans off when they are teaching – but would still accrue interest against the total. Or whether the equivalent amount of loan they would have been paying will be wiped off by the government.

The government started exploring this last year but a manifesto commitment is a significant step forward.

School leaders with squeezed budgets have long complained about recruitment agency costs and the high price of advertising jobs in newspapers and online.

The manifesto says the government will seek to replicate the NHS Jobs model.

17. Make sure no school has its budget cut as part of new funding formula

This has been a massive bone of contention for  Conservative back-benchers, many of whom campaigned for years for fairer funding, only to find their own constituencies’ schools would face cuts.

The protection for schools, estimated to cost £335 million per year, effectively raises the floor for losses set out in the original plans (it was set at 3 per cent).

However, Schools Week understands the funding formula protection will not account for inflation, so schools will still lose money in real terms.

In order to do this, the Conservatives must find an additional £1 billion a year.

£650 million  will come from scrapping universal infant free school meals, which the party believes is “not the best use of public money”

The rest will be found through “better systems” for the student loans companies (£200 million), departmental efficiencies (£160 million) and the soft drinks levy (£10 million).

This extends a commitment outlined by the former chancellor George Osborne in the last spending review in November 2015 to continue to pay out the grants of between £935 and £1,900 for certain pupils, including those from lower-income families and other disadvantaged backgrounds.

The Conservatives estimate the policy costs around £600m a year but, for a tenth of that, could instead provide free breakfasts – which have been found to have an impact on achievement, behaviour and attendance.

21. Primary schools in England will offer a free school breakfast to all pupils

The Conservatives estimate free breakfasts will cost £60 million a year, and claim that they have listened to both the Institute for Fiscal Studies and Association of School and College Leaders, both of which have suggested that breakfasts could be a better investment than free lunches.

22. Create a new ‘schools map’ to help parents choose a school that is right for their child – key information about quality of teaching, attainment and curriculum

A number of commercial organisations are already creating maps of information to inform parents about school choice.

The Department for Education is also working on a variety of new digital outputs, which this is likely to link into.

23. Work with schools to make sure those with intakes from one predominant racial, cultural or religious background teach British values

“Work with” – your guess is as good as ours.

25. Introduce presumption all new primary schools should include a nursery

This is an extension of a variety of policies that have been ticking over for a few years.

Money has been available for primary schools to build nurseries on their sites for some time.

However, the introduction of a “presumption” suggests that if any local authority or academy chain opens a new primary school then a condition of opening will be that it includes a nursery – this is new.

This was announced some time ago by the government.

28. Review support for children in need to understand why their outcomes are so poor

The category “children in needs” covers any children who are referred to children’s services. This can be for a variety of reasons.

Their outcomes are often very poor and the reasons are complex.

29. Ensure TAs can become qualified teachers through an apprenticeship route

Ministers are already working on a teaching apprenticeship, prompting speculation that it could eventually replace School Direct.

However, the government has previously stipulated that such a route would only be open to those who already have a degree, protecting the graduate-only nature of the teaching profession.

Allowing TAs to become qualified teachers through an apprenticeship would effectively create a no-degree route to QTS, although the qualification received at the end of the qualification may be at a level equivalent to a degree.