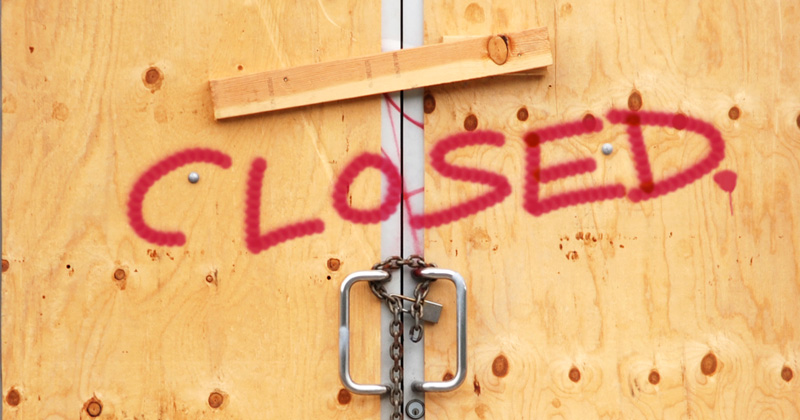 Soaring numbers of academy trusts are being wound up, and many are collapsing with deficits of millions of pounds, a Schools Week investigation has revealed.

Our analysis, using Companies House records, found at least 91 multi-academy trusts had closed or were in the process of being wound up since 2014.

However, more than half (46) closed or began closing this year – with figures soaring since 2014. The disclosure also comes after the government admitted last week that a lack of high-quality sponsors is still a “top risk” facing the academies system.

Closure rates are also likely to continue to rise after a series of high-profile academy trust failures such as Bright Tribe, Schools Company, and Wakefield City Academies Trust, which will soon officially close after their schools are rebrokered to other trusts.

Our investigation also revealed that closed trusts are likely to have benefited from at least £6 million in start-up funding.

There are also questions over what happens to important financial documents of collapsed trusts, with one expert claiming they are shredded a year after liquidation – despite guidance stating records should be kept for at least three years.

Schools Week collated the figures after the government admitted it does not collect figures for the number of trusts that have ceased to exist.

Why are trusts wound up?

It was not possible to find out exactly why each multi-academy trust closed. But reasons have included poor finances or outcomes for pupils and mergers with other chains.

Closing trusts as a result of mergers is a “good and responsible thing”, according to Leora Cruddas, chief executive of the Confederation of School Trusts, which represents academy trusts.

However, other trusts were closed as a result of poor performance. The Perry Beeches Academy Trust, which started the process of being struck off from Companies House this month, had its five schools rebrokered after a government investigation into financial malpractice.

Cruddas said it was “absolutely right” the DfE is acting to close trusts that don’t have the improvement capacity or financial capacity to support their schools.

“Where a trust is failing then intervention is positive – it’s a positive feature of the academies system.”

However it is still a small proportion of MATs. By comparison, the number of active MATs in England rose from 1,121 in November 2016, to 1,324 in January.

The cost of closure

The government hands out grants of between £70,000 and £150,000 for new academy sponsors to set up a trust, and also covers running costs for trusts until their first school opens.

Even if all 91 closed trusts received the lowest possible grant, the DfE would have paid out at least £6.3 million to set them up.

Experts told Schools Week that when a collapsed trust cannot repay its debts to the DfE, the department has little choice but to write off what is owed.

For instance, the DfE wrote off more than £500,000 owed by Lilac Sky Schools Academy Trust when it closed last year and £300,000 owed by the Collective Spirit Community Trust, which is due to close soon.

The DfE also even handed the latter trust just over £250,000 to “assist in the close-down” of its Collective Spirit Free School in Oldham, Greater Manchester.

A search of some of the higher-profile trusts where the government has stepped in to rebroker all of their schools – some of which are yet to officially close – also show they are millions of pounds in deficit.

In May the University of Chester Academies Trust was cautioned by the Education and Skill Funding Agency for a £3 million deficit. A month later it was announced that the trust would close and give up all seven of its schools.

Perry Beeches, meanwhile, had a £2.1 million deficit in October 2016. It is now being wound up.

Schools Company Trust also abandoned its schools this year, leaving a deficit “in the region of £8 million”.

In some cases, it may be possible for the government to reclaim money if it was spent improperly.

The DfE is looking to recover more than £300,000 in funding from the Bright Tribe Academy Trust, following allegations the money had not been used as intended. The trust offloaded its last six schools in September.

But where do a collapsed trust’s documents go?

Lawyers who worked on the closure of academy trusts told Schools Week there is little guidance, or any official processes, from the DfE regarding closures.

There is also confusion over what happens to important documents after trusts are wound up.

The DfE pointed Schools Week to charity law showing that documents and records, such as board-meeting minutes, must be kept for three to six years.

Schools Week understands this includes pupil records that must be held for six years, though the period is longer for special-needs pupils.

The government said liquidators or administrators are responsible for ensuring that relevant documents are safeguarded after a closure. The service is paid for out of the assets of the company.

One restructuring expert, who did not want to be named, said it was not uncommon for a liquidator to dispose of records within 12 months of the trust being dissolved, provided that they have permission from stakeholders or shareholders.

However, this does not apply to pupil records.

Andy Jolley, a former school governor and transparency campaigner, said no consideration has been given to any potential future legal action, which would require documents to be retained.

“This really hasn’t been thought through and is enabling people to walk away from failed trusts without scrutiny.”

Most trusts are wound up through the government’s Insolvency Service. As the service is a public body, it is understood documents handed over would be subject to the freedom of information act.

However Schools Week’s research found three trusts in “voluntary” liquidation with private liquidators, meaning any documents would fall out of reach of the FOI act.

It has emerged that the government has a team of troubleshooters – school leaders parachuted in as trustees to oversee struggling trusts.

The go-to shutdown specialist seems to be Angela Barry, a former headteacher appointed to the board of high-profile academy trust failures including Schools Company, Lilac Sky and Bright Tribe.

Speaking exclusively to Schools Week, Barry said the vast majority of people are in education “for all the right reasons”.

“They sincerely believe in the moral imperative of improving the life chances of the children in our care.”

But she added: “Where mistakes have been made – and these have happened in non-academies and academies – it is because people have lost sight of the moral imperative.

“This is unacceptable and it is absolutely right that there is scrutiny of mistakes, but it is also very easy to focus only on these and overlook the fact that our system is full of brilliant people, which includes so many blameless staff at academy trusts and at academies where mistakes have been made, and includes hard-working and talented civil servants at the Department for Education.”

Barry, who has worked in education for more than 30 years, including over 20 years as a head or executive head, added her work for trusts was to “sort out the issues” and ensure the “most important people – the children in schools – can access the very best education possible as quickly as possible”.

The Public Accounts Committee is due to scrutinise academy finances again next week with two hearings on “academy accounts and performance”. Barry will appear on behalf of Bright Tribe on Monday.

When presented with our findings on trust closures, Meg Hillier, chair of the committee, said: “What is the impact on these children?

“At the end of the day it’s students who have most to lose. A headteacher can walk away with a slap on the wrists, but this is pupil’s life chances.”

The DfE has detailed guidance for academy trusts that close their doors, but there is less information about the process of closing the trust.

Guidance states that disposal of academy assets – such as land, buildings, finances, and fixtures – will be carried out in partnership with regional schools commissioners.

Documents also state that once final accounts have been submitted, trusts should produce a “deed of termination” for agreement and sign-off by the government, before being removed from the register at Companies House.

Schools Week understands more detailed government guidance is due to be published shortly.

“The truth is that more academies than ever are joining or creating multi-academy trusts,” a DfE spokesperson said.

How we worked it out

When asked for the figures of closed trusts under the Freedom of Information Act, the DfE said it “does not collect information on trusts that cease to exist”.

However the DfE sent a list of 621 trusts that were registered on its academies management information system but had no schools.

The majority of these were single-academy trusts which no longer have a school because it set up or joined a MAT.

We ignored these, and analysed just the 159 that were registered as multi-academy trusts to establish whether they had closed.

Using Companies House records, we found that 91 multi-academy trusts had closed or were in the process of closure. More than half of these closures were registered this year.