Progress scores in a trust founded by the academies minister plummeted after a fast-track qualification was removed from government league tables in a move to clampdown on gaming.

The average Progress 8 score this year at the Inspiration Trust, which was founded by Lord Agnew, dipped more than in any other trust that entered most pupils into the ECDL qualification, according to new analysis by Education Datalab.

The BCS level 2 ECDL certificate in IT application skills was dropped from qualifications that count towards school performance table scores after accusations it was used to game league tables.

A clear relationship is visible, with those trusts that had higher ECDL entry rates on average being more likely to have experienced falls in their P8 scores between 2017 and 2018

It followed investigations by Schools Week that revealed some schools were allegedly teaching the qualification in just three days.

While figures for the school-level data for the number of pupils entered into the ECDL will be published in January, Inspiration confirmed it has stopped offering the course.

A spokesperson for the trust said it was “far too simplistic to claim a cause and effect from ECDL in a year when P8 scores have also been affected by new syllabi and splits in grade boundaries across dozens of subjects.

“There are too many moving parts and the changes too slight to draw any meaningful conclusions.”

But Philip Nye, the Datalab researcher who carried out the analysis, said in a blog published today that a “clear relationship is visible”, with trusts with higher ECDL entry rates on average “being more likely to have experienced falls in their P8 scores between 2017 and 2018”. 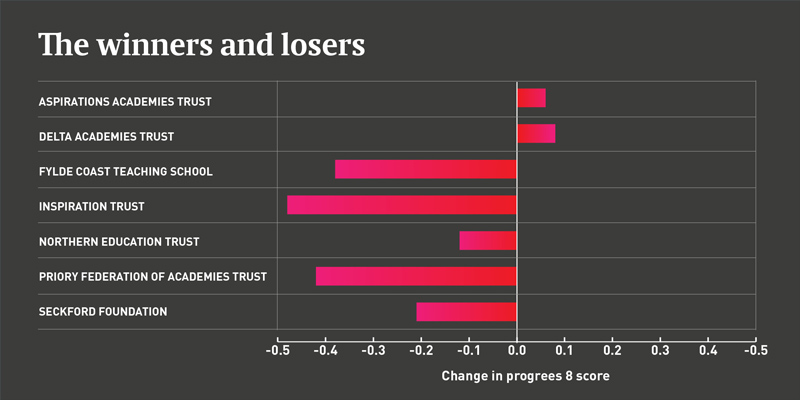 The data showed that for trusts with ECDL entry rates of 40 per cent or less, on average there was either no change, or a slightly positive change, in their scores.

However, among trusts that entered more than 80 per cent of their pupils for ECDL in 2017, P8 scores dropped this year by an average 0.13.

The next largest drop was at the Priory Federation of Academies Trust, which entered 85 per cent of pupils for the qualification in 2017.

Progress scores also dropped this year at The Fylde Coast Teaching School Trust, Seckford Foundation and Northern Education Trust. They had entered more than 80 per cent of pupils for the ECDL.

Rob Tarn, the chief executive of the Northern Education Trust, acknowledged the removal of the ECDL from league tables “undoubtedly had an impact” on scores.

But he said reductions in P8 at his schools were “largely a result of the then legacy curriculum model that led to a number of students having empty slots”. The trust no longer offered the qualification. 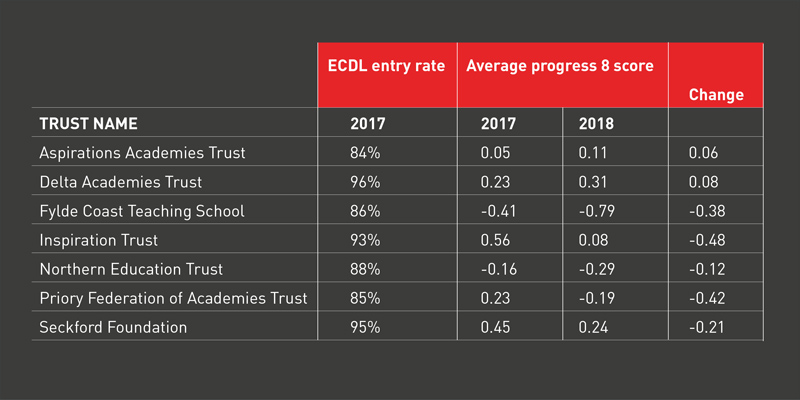 Steven Kenning, the chief executive of Aspirations, said his trust had “never used ECDL to improve results”, adding that it was “just seen as an additional IT qualification for students”.

He said the trust did not enter any pupil for the ECDL this year, but achieved the “best ever results in some of our schools”.

Nye said it was “no surprise” that schools took advantage of the ECDL, given that the main headline on which secondary performance was judged “is a zero-sum one”.

But he said that rather than focus on the “righting of league table wrongs”, it would be “much better … to hold a conversation about reducing the pressures that lead to gaming behaviour”.

Nerd note: The analysis looked only at schools that count towards each trust’s league table performance. This is based on the DfE’s own methodology, and only schools that have been with a trust for at least three years were included.