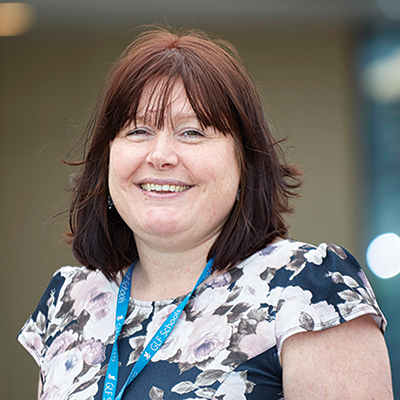 On a half-finished housing estate, nestled between between the A4130 and Wantage Road in Oxfordshire, builders are finishing a utopian dream of suburbia.

Over 3,300 new homes are under construction, alongside retirement flats, dentists, pubs, sports parks. It’s as if town planners from the 1950s time-travelled to the present and knocked themselves out with delight.

One of the selling points for the homes is the new Aureus secondary school due to open in September. An epic £19 million construction, with huge playing fields, gigantic design technology rooms, fancy science labs and… a pink computer room?

Hannah Wilson, the head of the new school, flips on the lights and smiles.

“I did it to subvert expectations,” she says, before heading off down to the atrium where a squad of hard-hatted, high-vizzed builders are putting the finishing touches to the building. Her excitement is palpable.

Though it is Wilson’s first headship, she is a familiar face to many in the education sector, having worked for ten years at Harris, the large London academy chain. She is also one of the founders of WomenEd, a grassroots movement which runs wildly successful “unconferences” across the country.

The pink computer room is one of WomenEd’s influences: as are gender-neutral toilets. While I’m there she asks for a “work table” to be removed from the staffroom. “This will be a place to chill,” she says, “the offices are for working” (there are lots of them).

Outside, in the yard, she has worked with the developers to create zones for sports, sitting and talking. Is it like her own school?

Will I stop doing WomenEd now that I’m a head? Are you having a laugh?

“No,” she says, “my school was nothing like this one.”

Brought up in a “bit of a bubble” in north Devon, Wilson’s parents announced when she was 10 that they would be sending her to West Buckland, a private school on Exmoor with a military background and a massive legacy. The young Wilson, who was getting on well at her local state primary school, was mortified.

“I was not happy. We had long conversations about it and they were adamant it was right for me,” she says. “To this day I think they wasted their money.”

Although she used the school’s extensive sport and performing arts facilities, and had plenty of friends, she always felt annoyed at being at the school.

“It was very materialistic. Everyone was either going to be a lawyer or a doctor I just didn’t want to be there. It wasn’t people I wanted to associate with. It was very old school.”

Her father had attended the school, and is still the captain of the old boys’ shooting club. Her sister attended. And, even now, most of her family send their children to private school.

“It’s interesting watching the cycle not breaking,” she says. “How a certain generation are always aspiring to the situation where they’ve got the money and status to go private. I challenge them, but we have a pact now that I cannot talk education at dinner parties.”

At 16 the tables turned and she informed her parents she would be going to the local college: “They couldn’t really stop me at that point.” Although attending North Devon College – a massive FE college – brought the reality, diversity and excitement Wilson craved, it had downsides.

“The quality of teaching was not good. The class sizes were massive. My French teacher was shocking and my mum had to pay for me to have teaching in the evenings, which was an interesting tension,” she recalls.

Her English teacher, however, was inspiring and encouraged her to apply for university which she did, though not before she almost died during a disastrous fall down a ski slope saved only by her mother – who is almost a foot shorter – hurling herself into her path.

The next day, with no skin on her back and blood seeping through her bandages, her father dragged her back out on to the slopes. “He told me that if I didn’t ski today, I’d never ski again. That’s the Wilson character-building secret. We pick ourselves up and go back to it.” After studying English at the University of Kent, a stint of office jobs put her off working in publishing or journalism as she planned. “I can’t sit at a desk,” she says.

Aware of teacher shortages in the early 2000s and lucrative golden handshake incentives, she took a PGCE. Her first job was in a grammar school in Kent. She found the idea uncomfortable but with a mortgage to pay the choice was simple: “I said yes because they would pay me from July the first.”

Finding the atmosphere stilted, she lasted one year before moving to Beverley Boys High School in Kingston, London. “It was very much bottom of the local school pyramid. Lots of gangs. A falling roll school. I had to confiscate baseball caps every day. I learned a lot about how the lack of systems and consistency creates stress.”

Wilson persisted though and became a head of year and department, before moving to Harris Merton in south London. The ethos there was quite different.

“Andy [the head] recruited an amazing team. Everyone had pastoral experience. It was a loud, proud school, with 1,200 kids. But we had systems, and transparency, and zero tolerance. You know where you stood and the kids knew where they stood. It was all the things I wanted.”

Eventually, after eight more years in school, she took a role at Harris’ central office.“That was really interesting… the ivory tower, 80 people over two floors. It is an absolute machine. I learned so much!”

Through these activities Wilson befriended a number of other female school leaders who also blogged, including Helena Marsh and Jill Berry. The group met one half term at the Hilton hotel on the motorway services at Bracknell, and over a cup of tea the women decided to run an event focused on female leadership, and tweeted about it. Microsoft offered a venue and the first WomenEd event ran in October 2015. Since then, local chapters have sprung up, and even an international WomenEd conference ran in Canada this April. Through the events she met Jon Chaloner, chief executive of GLF, the academy chain overseeing Aureus school. Impressed with Wilson, Chaloner offered her the chance to build a school from scratch – and she took it.

She is building the school based on the values developed throughout her career, but it’s not without difficulties. At one point Wilson mentions the school uniform won’t include ties for girls, “because why would you make girls wear ties?”

I ask why a transgender student should have to choose which type of shirt and tie (or not) to wear? She stops and reflects. She later tweets that discussions are ongoing.

Such challenge is not new to Wilson though who, given her relationship with WomenEd, often gets criticism thrown her way. What is her trick for managing it? “Not caring,” she says, “or, at least, I don’t lose sleep over it.”

“If people say something rude to me I address it courteously and then I move on. As long as you believe what you’re doing then you shouldn’t really care what other people do or don’t say.”

What the WomenEd, and the race equivalent BAMEed, have offered her is access to a group of diverse talent. “I’ve not paid for a single advert.” she says. “I’ve saved myself thousands and recruited amazing people from those networks. So when people ask me if I’m going to stop doing WomenEd now that I’m a head I think ‘Are you having a laugh?’”

And, as her parents learned when she was 10 years old, if you think she’s wrong, she’s likely to go on and prove you otherwise.

What is your favourite book?
For my students it has to be Maya Angelou’s ‘I Know Why the Caged Bird Sings’. I know that’s pretty clichéd, I know everyone says that, but I love Maya Angelou’s poetry and writing.

If you could have billboards all across the country with a slogan on them for a week, what would you pick?
Be 10 per cent braver.

Describe a party you went to as a child
I had a fancy dress party for my birthday every year. My mum and dad are mad party people. We had a punk party when I was eight or nine. And I remember playing that game where you cut chocolate up with a knife and fork and you have to put clothes on.

If you could be an animal, what would you be?
An elephant. They live for ages and the women run the herds.