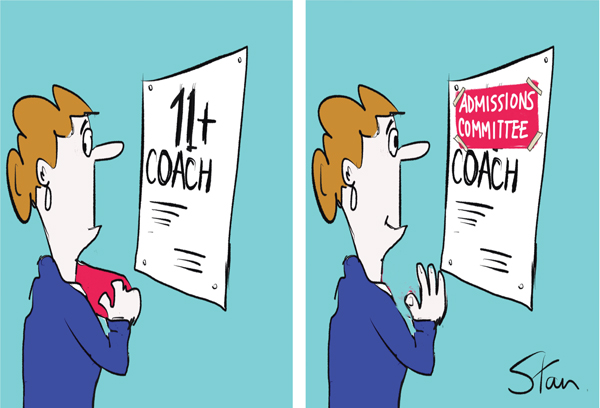 A grammar school wants to boost numbers by offering places to pupils that fail their 11-plus – as long as they show “sufficient evidence of being grammar school standard”.

Chatham Grammar School for Boys, in Kent, plans to award any unfilled places to children who fail the test. But they must provide an “admissions committee” with evidence they meet “grammar school standards”.

The committee will reportedly be made up of governors and will examine information including recommendations from headteachers, examples of previous work or proof that the child nearly passed the test.

It is among a series of proposals out for consultation from the under-subscribed school to boost numbers. Other measures include becoming co-educational by 2017.

A consultation document on the website of the school’s local authority, Medway Council, states: “From national offer day, any available spaces will be allocated to those children who have provided sufficient evidence to the admissions committee of being grammar school standard.”

No further information about the required evidence is included, and both the school and its sponsor, the Thinking Schools Academy Trust, did not respond to requests for comment.

“It’s a useful tool to have an examination followed by an interview with information from the primary school that can show what a child was doing.

“Exams only test intellectual ability. What they do not show are aspects of children’s character that means they can succeed. I welcome the chance to offer grammar school places to those on the cusp.”

Concerns have been raised locally that the selection process could be open to abuse and may not meet school admission rules.

But Alan Parker, a former schools adjudicator, told Schools Week: “As a designated grammar school Chatham is allowed to select by ability and it is up to them to decide how it is assessed; provided the method is ‘fair, transparent and objective’ – as required by the school admission code.”

He said the use of a lay panel to make the decision according to “vague criteria” could be problematic, but the school was allowed to set a lower bar than the standard Kent
11-plus test if it wished.

A letter to parents on the school’s website, signed by both the trust chairman Peter Martin and governing body chairman Michael Bailey, states: “Given the under-capacity, parents who are able to prove their child is of selective ability are able to gain a place in the school, removing them from their allocated high school.”

It said that this would allow the school to reach its published admission number and make it less likely to take pupils in on appeal.

Chatham has been a boys’-only school for nearly 200 years, but recently reduced its planned intake from 146 to 120 to reflect its declining roll.

In September 2013, Ofsted said its leadership and management were inadequate and the school was put in special measures. Following a 2014 report, it was judged to be good in all categories.

The online document says the school is operating with fewer than 120 new students per year – meaning it gets about £200,000 less in funding. It has already taken steps to cut costs, including axing drama from the key stage 4 curriculum.

The school’s website said no final decision would be made until feedback from parents and the community was considered. The consultation closed on Tuesday.

A Department for Education source said the school was rightly consulting with its community on the plans and said all schools must ensure places were offered in a fair and transparent way.