There are fresh moves afoot to make energy drinks illegal for anyone under 16, as one school resorts to bag searches for caffeinated drinks and sugary snacks to improve pupil behaviour.

A public health nutritionist wants to ban the sale of energy drinks, which can have more caffeine than a filter coffee, to pupils, so schools do not have to enforce strict policies. Her words follow celebrity chef Jamie Oliver also urging the government to introduce a ban.

Teeside University’s Dr Amelia Lake warned that drinks like Monster and Red Bull have detrimental effects on pupils’ behaviour and sleep patterns, and can be addictive.

Children need to be supported in developing healthy lifestyles, as well as protected from exposure to known addictive substances

Her words were backed by Tom Bennett, the government’s behaviour tsar, who said the health implications of the high-caffeine content made energy drinks a “child protection issue” as much as a behaviour issue.

“Children need to be supported in developing healthy lifestyles, as well as protected from exposure to known addictive substances,” he said.

Bennett also applauded the Charles Dickens School in Kent, which faced a backlash from some parents last week after it began confiscating all energy and fizzy drinks, as well as sugary snacks and unhealthy food, from pupils’ bags. One parent accused the school of being a “boot camp”.

But he insisted that schools have a right to ban contraband on their own premises, be it drugs, knives or food. If the policy is effectively communicated to parents, they “can’t claim not to know why items have been confiscated”.

Staff can search without consent for “any item banned by the school rules which has been identified in the rules as an item which may be searched for”, according to updated government guidance released on Thursday.

Pupils at Harris academy trust in London have decided to campaign against the drinks themselves after starring with Oliver in a Channel 4 programme about the dangers of energy drinks.

Dr Lake, who is also associate director at the Fuse Centre in Newcastle, which researches public health, claimed pupils in some schools are smuggling energy drinks into school in unmarked bottles.

“I’ve read the toxicology reports on these drinks. Children under 16 should absolutely not be able to have them,” she said, as it is “very challenging for schools to have to police this on top of everything else”.

If energy drinks are banned for under-16s, as they are in some other European countries, the situation for schools would be “much clearer,” she said.

Energy drinks were also raised at prime minister’s questions last week. Maria Caulfield, the Conservative MP for Lewes, said the family of a 25-year-old constituent who took his own life were certain that his escalating energy drink habit, which had reached 15 cans a day, had contributed to his anxiety and death.

I’ve read the toxicology reports on these drinks. Children under 16 should absolutely not be able to have them

She asked Theresa May whether national legislation would be changed to match Waitrose, Aldi and Asda, which this month banned the sale of drinks with more than 150mg of caffeine per litre to under-16s. The prime minister replied that the Department of Health was looking at the scientific evidence on the matter.

Certain European countries have already changed their laws. Lithuania led the way almost four years ago by banning energy drinks for anyone under 18, followed a couple of years later by Latvia.

Back in 2012, Canada reclassified energy drinks from “natural health products” to “food” which allowed the government to limit their caffeine content to 180mg.

For most adults, 400mg of caffeine a day is considered safe, but for adolescents it is 100mg.

Meanwhile, Public Health England, an executive agency running within the DoH, has said pupils should not have more than “two snacks a day” coming to more than 100 calories each.

Research has revealed children are consuming three times more sugar a day than is recommended, the equivalent of seven sugar cubes, meaning a third of pupils leave primary school overweight or obese. 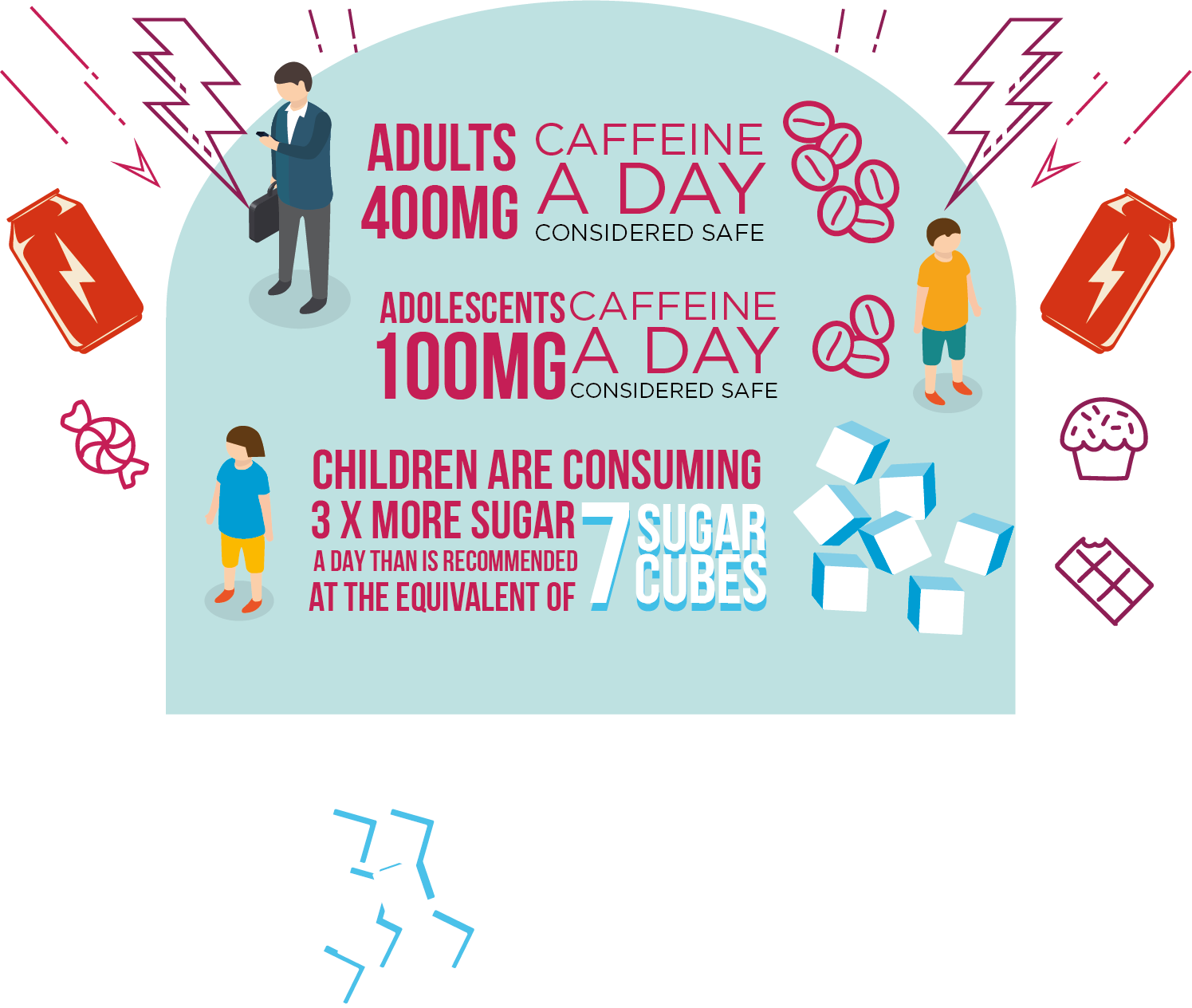