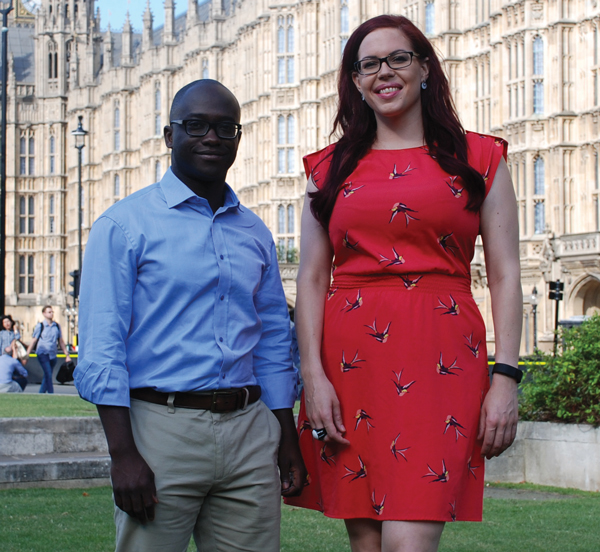 And despite her vocal support for new government initiatives on peer-to-peer mentoring and partnerships between teachers and mental health services, Natasha Devon (pictured with Sam Gyimah) has called for more funding for teacher training and to address a “struggle” to access school counsellors.

Ms Devon, who was recently appointed as the Department for Education’s (DfE) mental health champion, told Schools Week she had never met education professionals with a “kind word to say” about Mr Gove’s time at the department, despite working in about three schools a week during his tenure.

The prominent campaigner on body image said on Twitter that her experiences in schools between 2010 and 2014 was the “main reason” she “despised” him as education secretary.

Ms Devon, who founded the Self-Esteem Team and Body Gossip education programme, was appointed to the advisory role in August last year with a remit to “raise awareness and reduce the stigma around young people’s mental health”.

She said Mr Gove’s refusal to accept the link between health and self-esteem and performance at school manifested in many ways, including a “narrowed curriculum”, “slashed budgets” and his “refusal to sign a mandate” ensuring a minimum of two hours of physical education per week.

She said: “Some staffrooms even had a dartboard with his face on it. Talking to teachers, one got the impression that he made them feel devalued by refusing to listen to voices within the industry.”

The campaigner is less critical of Nicky Morgan, Mr Gove’s successor, who, she said, made clear in speeches her intention to “prioritise wellbeing. From a pastoral point of view, Ms Morgan couldn’t be more different from Mr Gove.”

But Ms Devon said there was still “more that can and should be done”.

She called for better and easier access to school counsellors, something that was a “struggle” in the schools she had visited.

“I’d also like all state schools to have a decent budget so that if their staff don’t feel equipped to tackle mental health lessons themselves, they can invite in outside experts like myself and my team.

“It should also be mandatory to have a mental health first-aider on site, in just the same way as we have physical health
first-aiders.”

Ms Devon is currently working with charities, campaigners and education professionals on a report on best practice for schools, with proposals ranging from suggested discussion topics in class to reduce stigma, to wellbeing exercises.

“Mr Gove was an incredibly divisive education secretary and has left relations between teachers and the DfE more fraught than ever,” she said.

“I’d like to go some way to healing that rift so that we can join forces to work towards the common aim of improving pupil wellbeing so that young people can fulfil their potential.”

Last year, the government announced that £1.25 billion would be invested in young people’s mental health over the course of this parliament, with £150 million coming from the Department of Health to improve services for young people with eating disorders.