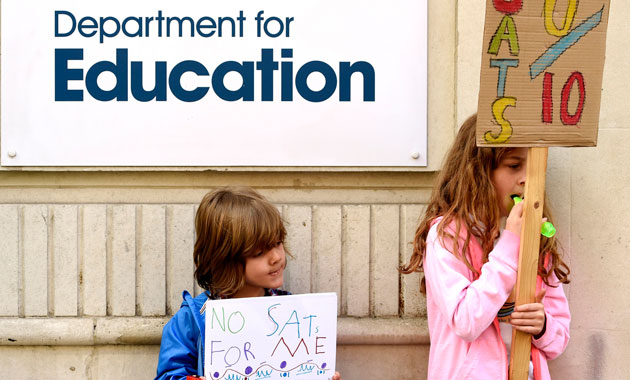 The government has refused to change primary tests in response to this week’s unprecedented parent protests, backed by tens of thousands of online signatories and two children’s laureates.

With disputes over the number of children kept off school on Tuesday, Sir Michael Wilshaw, Ofsted’s chief inspector, weighed in to support the new national curriculum assessments that begin this month.

In Brighton, a rally attended by Chris Riddell, the children’s laureate, attracted more than 500 parents and children, but local primary schools reported only a “handful” of absences.

The group gathered in the city’s Preston Park to wave banners and chant “hands off our schools”, before Riddell told them that rather than focusing on testing, more emphasis should be placed on issues such as protecting school libraries and librarians.

In a statement Wilshaw firmly backed the government, saying he “fully supports” the tougher tests for primary pupils so teachers could “identify weaknesses” in literacy and numeracy at an early age.

“Those who oppose this testing need to consider England’s mediocre position in the OECD education rankings,” he added.

“As I have long argued, children who fall behind in the early years of their education struggle to catch up in later years. If by the age of seven, a child has not mastered the basic skills of reading, writing and mathematics, the odds will be stacked against them for the rest of their lives. This is especially the case for poorer children.”

Lucy Powell, the shadow education secretary, would not condone the parents’ boycott but claimed ministers had “ridden roughshod” over the concerns of headteachers and parents about SATs.

She said: “This government is creating chaos and confusion in primary assessment in schools, with a huge number of changes to SATs specifications since children started school last September.”

In January this year, the government made more than 30 updates to its guidance on the tests, leading one primary leader to say the assessments were a “dog’s breakfast”.

When pressed by Schools Week the day after the protests, Nick Gibb, the schools minister, claimed the government “always listens” to criticisms of policy, and insisted that testing was “very important” in holding schools to account and the assessments had “no real consequences” for the young people who took them.

He said the tests had been reviewed “a great deal” to ensure young people were leaving primary school “fully literate and numerate” and he was “very confident” that schools were “very well-prepared”.

A spokesperson for the Department for Education said only a minority of parents took the “unwarranted step” of keeping their children out of schools.

Campaign group Let Kids be Kids, which organised the protest, asked parents to register their participation to counter reports of low numbers, and on Wednesday received notification of 6,603 primary children who had missed school in the protests.