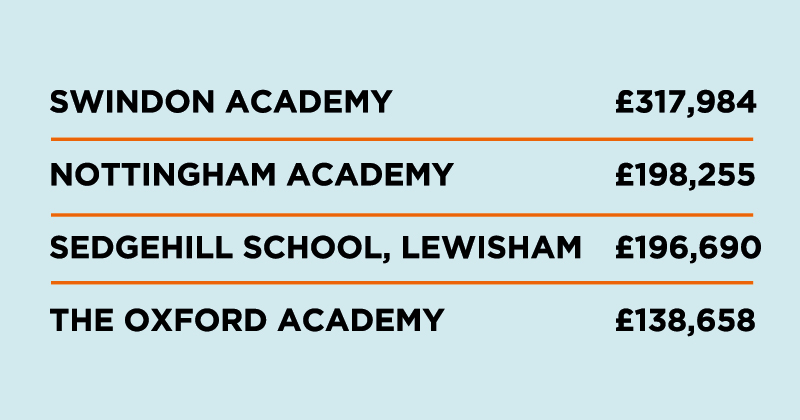 Schools and colleges have lost almost £6 million in funding this year as a result of new rules around GCSE English and maths resits.

More than £5.9 million of “adjustments” have been made to this year’s funding allocations in more than 290 schools, sixth-form colleges and university technical colleges, with some losing six-figure sums.

Under the government’s new study programmes, schools can lose half their per-pupil funding for every individual without a pass in GCSE English or maths who does not continue studying the subjects when in post-16 study.

The requirement has been in place since 2014, but adjustments are made in the year following any breach of the condition, meaning this is the first year schools have seen an impact on their budgets.

Schools are required to record information such as exemptions to the GCSE English and maths rule as part of the school census data collection, but Paul Hanks, a sixth-form funding expert who runs consultancy Pro16 Plus, claimed many were failing to do so despite correct training in place.

“The tragedy of this issue is, based on my experience of the data we have looked at from sixth forms across the country is that most do, in fact, deliver English and maths qualifications. The issue is more one of recording the data rather than not delivering,” he told Schools Week.

“In the past year we have been told by [some] sixth forms that they do not record any level 2 qualifications, GCSEs or any November resits.”
The amount of money lost depends on how many pupils a school is expected to enrol on English or maths courses.

Swindon academy, which according to government documents did not meet funding conditions for 185 of its pupils, has lost £317,984, while Nottingham academy lost £198,255 for 117 pupils.

A spokesperson for United Learning said the adjustment in funding at Swindon Academy was the result of an “administrative error at the school” in 2014-15, which was highlighted with the EFA at the time.

The trust said the issue was resolved and rectified by October this year, and that the school has “no funding deficit”.

Others have also questioned the drop in their funding and challenged the government to rectify the issue.

Last week, the Telegraph and Argus in Bradford reported that local schools Hanson academy and Tong high school blamed an administrative error for their combined loss of almost £190,000, while Buttershaw business and enterprise college said it did not have any pupils in need of resits, despite losing £38,398.

Bradford council told the Argus there was a “nationwide issue” with the funding.

Hanks warned that the relationship between census data and funding “often slips from the view of very busy school staff”. Sixth forms also often did not have someone to review census data with an eye to the impact on funding and the funding formula.

A government spokesperson said: “The rules are clear that Education Funding Agency funding is subject to schools providing English and maths tuition up to and including GCSE level. This has been a requirement since 2014. We regularly remind the post-16 sector, including schools, of these requirements.”