Schools will have to provide samples of student work within two days of being asked under the quality assurance process for teacher assessed grades this year.

It is the latest Ofqual update to the grading process this year – with just under eight weeks to go until the submission deadline on June 18.

In a blog published today, Cath Jadhav, Ofqual’s director of standards and comparability, said exam boards would request samples of work from all schools.

Others have pointed out how the checks fit with Gavin Williamson’s promise to “trust teachers” over this year’s grading process.

Exam boards will request samples from at least five students in at least one subject at A-level and two subjects at GCSE, one of which is likely to be either English language or maths. 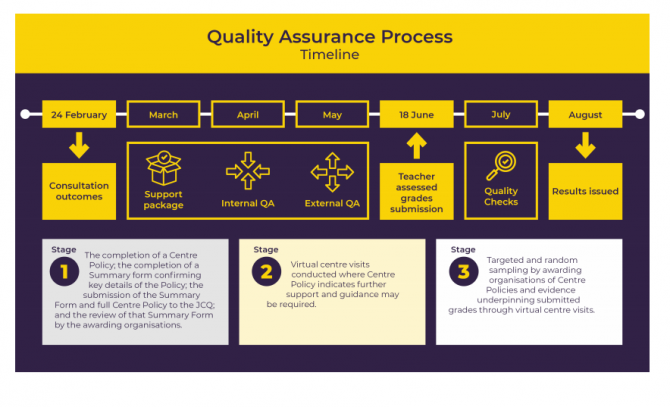 Boards will also select schools where the proportion of grades in 2021 appears “significantly higher or lower” than results in previous years when exams took place – 2017, 2018 and 2019.

But the comparison will be made at qualification level, rather than individual subject.

Boards will prioritise checks at schools where results are “more out of line” with historical results.

But Jadhav said it does not mean schools must award grades “to closely match those in previous years” or that the information from previous years “should be used to suppress results”.

“There can be good reasons for results to vary from one year to the next, and centres should record the reasons for any substantial variances, in line with the centre’s policy.”

The first two stages of quality assurances involve every school having their centre policy summary reviews by exam boards. Virtual visits will then take place at the second stage, if the board has questions or concerns.

The JCQ guidance published last month said that a school’s failure to engage in quality checks could lead to further investigation.