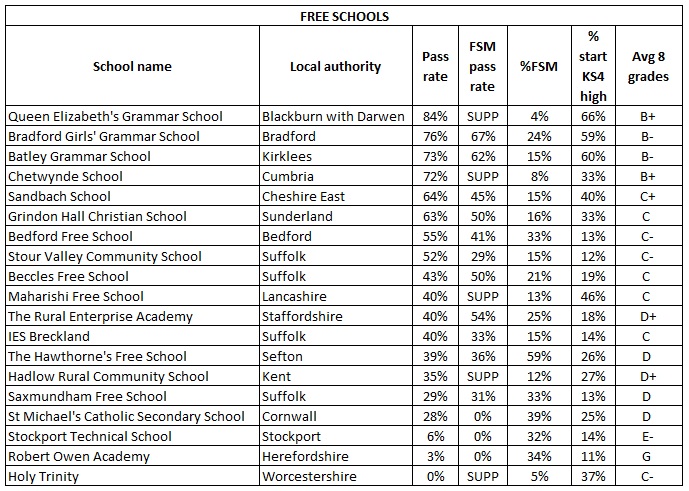 The performance of free schools in this year’s GCSEs is mixed – with half of the schools failing to meet the national floor standard or just scraping through.

Today, the Department for Education released the school performance tables. A secondary school is considered to be failing if fewer than 40 per cent of its pupils achieve five A*-C grades, including English and maths.

Nationally, more than 300 schools did not meet the floor standard – or 10 per cent of state schools.

There were just 20 free schools with pupils who sat GCSE last year (pictured above). Of those, seven did not meet the floor standard. A further three just manage a 40 per cent pass rate.

Included in those failing free schools is the former St Michael’s Catholic Secondary School in Cornwall where just 28 per cent of pupils gained the required number of GCSEs. None of the disadvantaged pupils (38 per cent of the cohort) achieved five A*-C GCSEs, including English and maths.

Last May, the school announced it was no longer “financially viable” and has now been merged with Camborne Science and International Academy. It has since changed its name to St Michael’s secondary school.

Saxmundham Free School in Suffolk, one of two schools run by The Seckford Foundation Free Schools Trust, announced in August that it was launching an external review after such disappointing results in its first year. Official figures show only 29 per cent of pupils met the benchmark.

In contrast, six free schools beat the national average (57.1 per cent). These include Queen Elizabeth’s Grammar School, a former independent school, where 84 per cent of pupils met the benchmark. Just four per cent of its pupils are registered as being on free school meals. Former independent school, Bradford Girls’ Grammar School, also posted good results.

A Department for Education spokesperson said: “Free Schools are a key part of our drive to achieve educational excellence everywhere – boosting choice for parents and helping drive up standards across the country – with free schools more likely to be rated ‘Outstanding’ by Ofsted than other state schools.

“The number of free schools with exam results is still too small to allow robust conclusions to be drawn. But underperformance at any school is unacceptable, and one of the strengths of the free schools programme is that when we spot failure we can act quickly.”

Schools Week has also produced its annual league tables showing the best schools in the country for disadvantaged pupils.