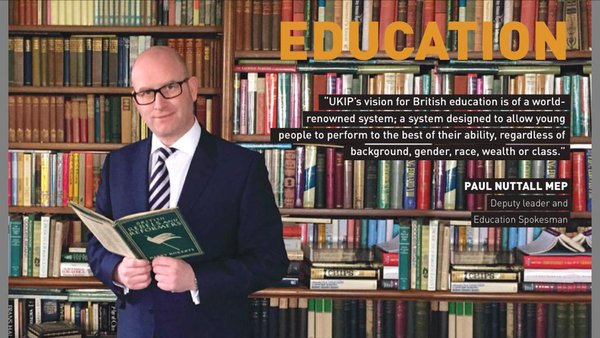 Paul Nuttall, a former history lecturer who served as the UK Independence Party’s spokesperson on education for two years has been named as its new leader.

The 39-year-old, from Merseyside, led on education policy for the party between July 2014 and this September while also serving as its deputy leader.

Nuttall, a big fan of grammar schools, was widely mocked last year after he appeared in a photograph in the party’s general election manifesto posing in front of a selection of books which appeared to have been edited, with several of the books appearing twice in similar positions elsewhere in the picture.

As the party’s education spokesperson, Nuttall has argued for a return to “a more traditional primary education with the three Rs”. He also wants sex and relationship education scrapped for children under the age of 11 and a grammar school in every town.

Nuttall also advocates massive reform to the exams sector, with one exam board for both GCSEs and A levels offering one course for each subject. He has also spoken about “ending the option for schools to choose the easiest syllabus available”.

Other policies proposed by Nuttall include Ofsted inspections triggered by a petition of 25 per cent of parents and governors, which was suggested in the wake of the Trojan Horse extremism scandal in Birmingham.

He has also pledged to “reverse the trend to shut special schools”.

Nuttall is the party’s third leader in several months, and his election with more than 62 per cent of the vote comes after Diane James, who was elected earlier this year to succeed Nigel Farage, stood down after just 18 days.

He beat fellow member of the European Parliament (MEP) Suzanne Evans and party activist John Rees-Evans to the top job.

In his victory, he stressed the need for the party to unite, and said he wanted it to “replace the Labour party and make UKIP the patriotic voice of the working people”.