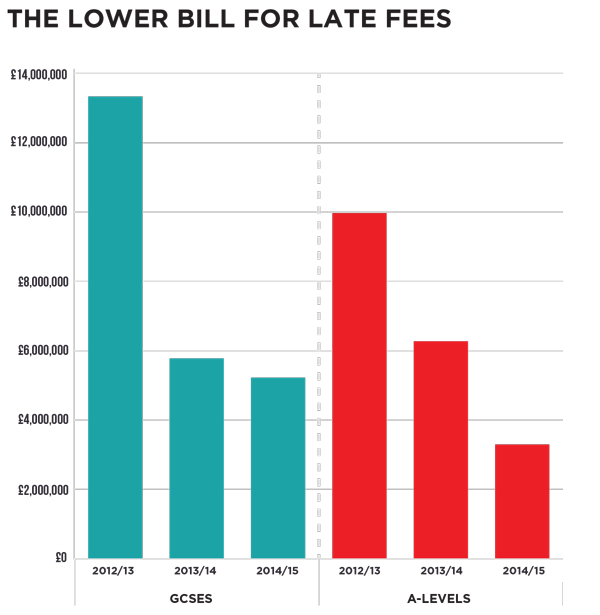 Schools have continued to save money on exams, despite an increase in the number of late entrants, Schools Week estimates.

Ofqual’s latest figures show in 2014/15, 633,000 students, or about 3 per cent of candidates for GCSEs or A-levels with exam boards OCR, Pearson and AQA, were entered late. This compares with 625,600 the previous year.

In the last academic year and based on the exam boards’ published costs of entering pupils for each unit, per subject, schools would have had to pay £8.5 million. In 2013/14, this would have been about £12 million, and in 2012/13 it would have cost a staggering £23 million.

AQA and Pearson charge schools at least double if they miss the original deadline for exam entries; late entrants for OCR exams incur at least an additional £16.20. Costs can treble, depending on how late the entries are.

Most GCSEs are made up of at least two units, although some have as many as six. A-levels typically have four units. Costs vary according to how many units students take.

The drop in A-level entries has been attributed to the move to linear exams, so schools are less likely to make exam entry decisions based on January or March exam results.

Ofqual added in its report: “The reduction in the number of exam series is likely to have enabled centres to better manage entries for their candidates.”

There was a 79 per cent increase in the number of late entries to GCSEs run by exam board Pearson.

The number of late entries to AQA – the most popular board – remained stable, although it still had the highest proportion of late entries, at 4.14 per cent.

An AQA spokesperson said: “We’ve been working really hard with schools and colleges to help them to reduce their late entries and avoid extra costs. We’re a charity, so we don’t profit from the fees, and only make a reasonable charge to cover the additional costs involved.”

An OCR spokesperson said: “We are delighted that the number of late entries for OCR GCSEs and A-levels has fallen so markedly, which is testament to the hard work put in by exam officers and OCR staff to help schools and colleges save money.”

Extra costs are incurred, the boards say, for extra print runs, the training of additional examiners, and despatching.