Amanda Spielman, the chief inspector, caused a stir last week after claiming that lower grades for schools in deprived areas was offset by praise for leaders.

Spielman said that Ofsted recognised the “relative strength” of schools in poorer areas by rating their leadership more highly – after admitting schools in more affluent areas were awarded better grades.

She said that analysis by the watchdog found “compared with more advantaged schools, disadvantaged schools are quite a lot more likely to have Ofsted rate their leadership and management more highly than their overall effectiveness”.

The watchdog told Schools Week it was unable to share the data as it had not been published publicly.

So, we attempted to replicate a study that could back up the claims.

The number crunchers at Education Datalab analysed the inspection results of 1,389 primary and secondary schools between September 2019 and March 2020 (when inspections were halted).

The analysis removed any schools judged ‘outstanding’ – as their leadership grade cannot be higher than their overall grade. 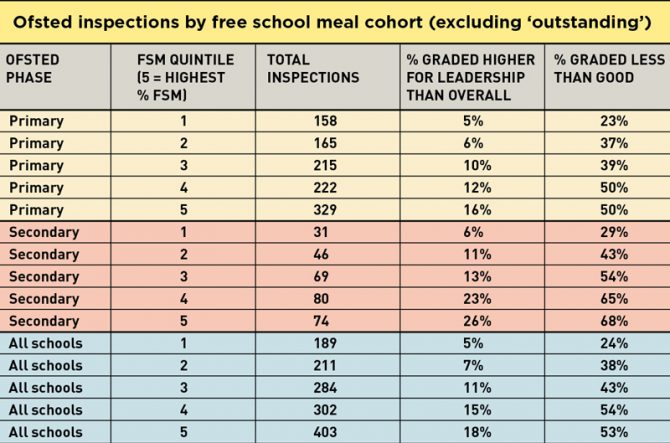 Education Datalab compared schools against the percentage of pupils eligible for free school meals (FSM) in the January 2020 census, broken down into five quintiles.

They found that 16 per cent of primary schools with the most disadvantaged cohorts were awarded higher leadership judgments than their overall grade, compared with just 5 per cent of the most affluent schools.

But Stephen Tierney, the chair of the Headteachers’ Roundtable, said there was a “real perception” among leaders in disadvantaged areas that a higher leadership judgment was “a condescending pat on the head”.

He added the overall judgement was “ultimately what schools live and die by” and Ofsted inspections were more suited to “provide narrative judgements” rather than grades.