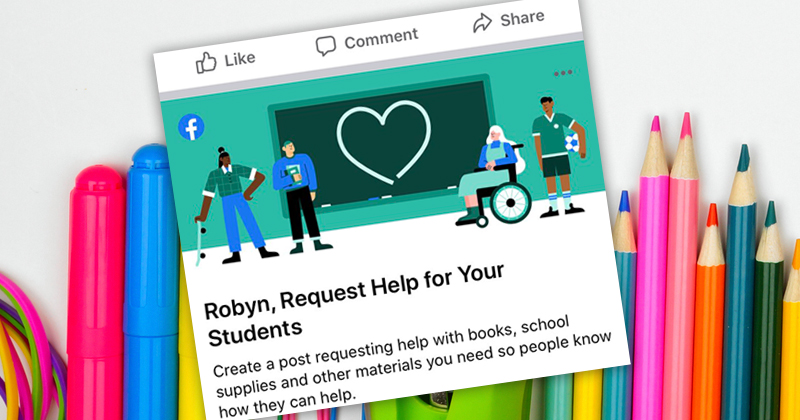 Facebook has urged teachers to use its social media platform to request help if they need school supplies.

The social media giant told Schools Week that this was part of a one-week pilot campaign in the US, UK and Canada to reach teachers who might need support.

But teachers said the post, which appeared at the top of their timeline, was invasive. Sarah Sheppard, a secondary English teacher in Hertfordshire, said: “It would be really weird asking for us to do that on Facebook.

“I didn’t do it because of that. I would ask my headteacher first. It feels a bit invasive.”

Another teacher said that they “didn’t feel comfortable with it at all”.

Facebook apologised this week to any teachers “who found this experience unhelpful”.

The post seen on teachers’ Facebook read: “Create a post requesting help with books, school supplies and other materials you need so people know how they can help.”

The social media giant said the short, top-of-newsfeed pilot campaign would direct users  to the Community Help part of the website. This was launched in response to the Covid-19 pandemic and has been used for mask donations and other supplies.

Facebook said the trial was a response to an increase in teachers seeking help or support with teaching students at home.

The social media platform shared the pilot with people who listed working at a school in their profile, administrators of education Facebook pages and members of teaching Facebook groups. It would not confirm how many UK teachers were targeted.

Facebook provided examples of posts from teachers and parents asking for help in September, including one seeking unused Apple iMacs and MacBooks for music students.

Another post asked for laptops for a school and a third was from a parent looking for books for a son with Downs Syndrome.

Schools Week revealed two years ago that schools were asking for toys, books and “scientific slime” through Amazon wishlists, with unions warning that budgets had reached breaking point.

Schools have also asked parents for donations to help fund a range of items, from toilet roll to crayons and a new playground.

A study in 2018 found that more than four in ten primary schools in Kent depended on fundraising to deliver a basic education for their pupils. However, pleas for donations appear to have declined following the government’s school budget boost.

Matthew Clements Wheeler, former chair of the Institute of School Business Leaders, said that “carefully curated” support-raising campaigns “have their place”, but they were usually run with the school’s governing body or trust.

He said that teachers and support staff do not usually see Facebook as a “professional networking tool”, aside from informal collaboration around subject specialisms.

He added: “Some teachers, where their school or trust policy is permitted, may post work-related posts or fundraising posts for their organisation. But my impression is that most school-based staff use Facebook for a good old gossip and would probably find a prompt to turn Facebook into something work related, invasive and unwelcome.”

A Facebook spokesperson said they were always looking for new ways to make it easier to seek support. They added: “We apologise to any teachers who found this experience unhelpful and we will continue to work with partners and educators to make it more meaningful.”