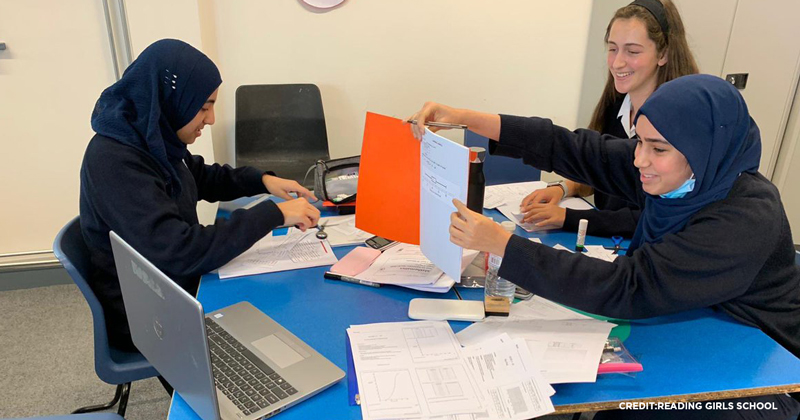 Teachers are donning wireless microphones while pupils are replaced by webcams as schools invest thousands of pounds to live stream lessons to self-isolating pupils and those trapped abroad.

The Department for Education revealed this week around 1,500 schools have been forced to partially close – with 84 per cent of state-funded secondary schools fully open, compared with 92 per cent the previous week.

But as the number of self-isolating pupils increases, state schools are developing new ways to ensure those pupils don’t miss out.

A webcam is set up on a teacher so the pupil can view the lesson and any associated PowerPoints. Meanwhile, in subjects such as French, the laptop may be placed in the pupil’s usual seat so they can engage with other pupils for group work as normal (see image).

The school of 560 pupils has around 120 Chromebooks which it can distribute to pupils who require them – with a pupil survey revealing 53 pupils may need to use the resource.

It has also spent £525 on Bluetooth microphones which allow teachers to move around the classroom when streaming.

The school has had as many as 15 pupils self-isolating, including two in the Middle East who are currently unable to return home due to Covid restrictions.

England’s largest academy trust, United Learning, has also set up all its schools to “teach live”, using either Microsoft Teams or Google Meet to reach pupils at home. The trust purchased over 11,000 Chromebooks last year to ensure all pupils could benefit.

Chief executive Sir Jon Coles said they have “made it a normal part of the way they work”.

Dominic Norrish, chief operating officer at the trust, said during an Ed Tech demonstrator seminar earlier this week that the method “halved workload” and ensured teachers were not “double planning” lessons.

But he advised that the system worked better with older children in secondary schools and warned that teachers must ensure they control the call and the direction of the camera, for safeguarding reasons.

But Norrish explained safeguarding controls on applications such as Microsoft Teams, Zoom and Google Classroom had greatly developed since the early days of the pandemic.

At Community Schools Trust self-isolating teachers streaming lessons back into the classroom via Google Classroom. All lessons are live streamed from teachers’ laptops, whether they are at home or in school, through the trust’s Dynamic Progress Report online portal.

If a teacher is self-isolating, the lesson is broadcast into the classroom’s video screen, with a cover teacher on hand to resolve any issues. Likewise, if a pupil in the same class is also self-isolating, they can log on at home.

Last week seven teachers across the trust employed the methods while awaiting a Covid-19 test.

Simon Elliott, the trust’s chief executive, added: “It’s been brilliant because the pupils value the continuity of learning, expert teachers are delivering the lessons and then there is someone there to take care of any potential problems in the classroom.”

During lockdown the trust received £50,000 from an anonymous donor which it spent on “laptops and dongles” for pupils without access to a computer.

The shift to live learning suggests state schools are closing the tech gap between their private school peers.

During the summer lockdown, a Teacher Tapp survey found around 50 per cent of private school teachers were delivering live-streaming lessons compared with just five per cent of state schools.

Dr Mary Bousted, joint general secretary at the NEU, said schools should “do what works best for pupils in their particular circumstances, within the limitations of the technology and wi-fi available, with proper time for teachers to plan and to teach, and with the right safeguarding controls in place”.