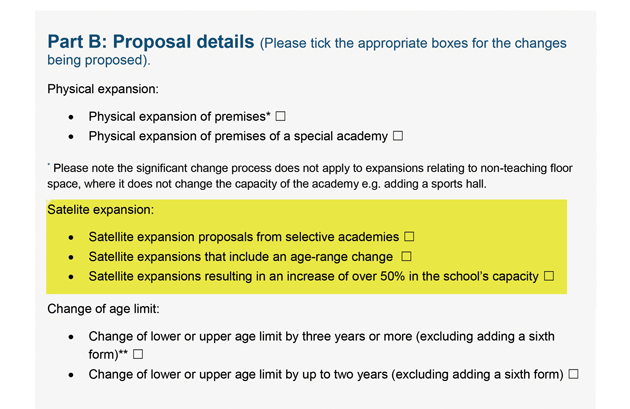 Grammar schools that want to expand to a satellite site can now tick a box to submit their proposals.

The Department for Education has released an updated form this month for academies to apply for significant changes, which includes a specific
tick-box for selective schools looking to expand.

It follows the government’s controversial decision to allow the Weald of Kent grammar to expand on to a new site nine miles from its current base.

Education secretary Nicky Morgan said at the time it was unlikely the approval would “open any kind of precedent”.

But campaigners have said the addition of a specific tick-box shows the department is “ready to open the floodgates”.

Joanne Bartley, a Kent mother who founded the anti-grammar expansion Kent Education Network, said: “Our feeling is that this is a clear admission that the government welcomes more selective school ‘annexes’.

“This goes against everything that was said about the Weald of Kent being a one-off expansion based on exceptional circumstances.”

The DfE has denied this is a change of position, saying expansion will only be approved if it is “a genuine continuation of the same school”.

The department said the business case document had been updated to make sure the application process reflected the various possibilities available to academies.

After ticking the relevant box, grammar schools must also provide details of their rationale, show they have consulted on the plans and prove there is a local need for places.

At least 10 areas are considering submitting applications, including the Royal borough of Windsor and Maidenhead.

The council is investigating the possibilities of allowing Sir William Borlase grammar, based in neighbouring Buckinghamshire, to open a satellite site in the area.

Ms Bartley added: “If the government is adding a tick-box to its own forms it is clearly anticipating applications from many more grammar schools to build ‘annexe’ schools in neighbouring towns.

“These new selective grammar school ‘annexes’ will be created without any parliamentary debate or legislative changes.”

Kent Education Network is still pursuing the government and Kent County Council to release the documents it holds on Weald of Kent’s application to expand.

Both parties have refused to release the information under the Freedom of Information Act, but the campaign group has appealed the refusal.

But this does not apply to selective schools looking to expand.

Documents say the education secretary has to make the final decision about whether to allow these applications, weighing up whether the business case is “genuinely a change to an existing school or is in effect a new school”.

A spokesperson for the Department for Education said: “This does not reflect a change to the government’s position on the prohibition of new selective schools.

“We are committed to allowing all good and outstanding schools to expand to offer excellent places to local students, but they can only do so within the law.”