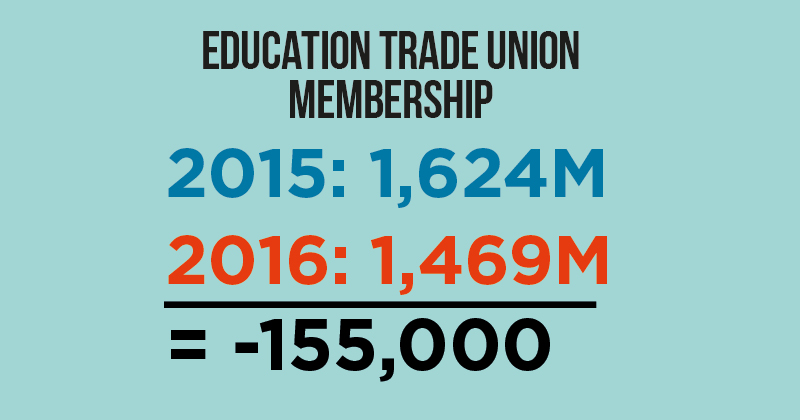 Membership of education trade unions is at its lowest level in nearly a decade, amid a 10 per cent plunge last year.

The unions are blaming cuts to support staff, the increasing number of existing teachers leaving the profession early, and the introduction of zero-hour contracts in further and higher education as some of the key reasons for this fall.

Annual trade union membership statistics, released last week by the Department for Business Energy and Industrial Strategy (BEIS), show there were 1,469,000 people working in education in 2016 who belonged to a union, compared with 1,624,000 the previous year – a drop of 155,000 members.

It brings education trade union membership down to its lowest level since 2008, when membership was at 1,424,000.

At 48 per cent, it also brings the total percentage of workers in the education sector who are in a union to below 50 per cent for the first time in 12 years, though education remains the most unionised sector in the country.

The decline has left the union leadership “surprised”, as many are reporting increases in membership.

Kevin Courtney, the general secretary of the National Union of Teachers, said there was “no truth” in the suggestion that unions are “on the wane” in the education sector, and confirmed that the NUT’s membership grew in 2016 – but did not say by how much.

He said “attacks on the public sector more generally” have led to the loss of many jobs in education, which could be a reason for the overall dip in membership. The growth of zero-hour contracts and a “boom in the gig economy” are also pushing people out of jobs in education and union membership, he added.

Mary Bousted, the general secretary of the Association of Teachers and Lecturers, pointed out that BEIS’ trade union statistics for education covers further and higher education – sectors which she said are increasingly “high-casualty workforces” in which it is “harder to retain members” – which could be a reason for the overall decline.

Membership at the University and College Union (UCU) fell by around one per cent between 2015 and 2016. Its general secretary Sally Hunt said that with rising levels of “casual employment” in education and a “government openly hostile” to trade unions meant the fall was “little surprising”.

Bousted, who revealed her union’s membership also dropped by around one per cent during 2016, pointed to a “huge amount of churn” in the teaching profession, where unions are recruiting a lot of new members, but where “half” of the profession leave “within four to 10 years”.

There are now more part-time staff working in education, she added, which “could also be driving down membership rates”.

Union membership fees vary. For full-time teachers at the NUT, for example, membership costs £177 per year, while at the ATL it costs £103 per year.

“Newly qualified teachers have half of their wages go in student loan repayments, pension entitlement, and all the rest,” Bousted said. “Even though union fees are very low that could be putting them off.”

Jon Richards, head of education at Unison, agreed with Bousted and said there is evidence that “price has become an issue and people are looking at costs – unsurprising as wages have stalled – this is a particular issue for support staff unions as most of our members are from lower pay bands”.

Unison experienced a drop of around two per cent in membership in 2016.

Richards said this was “mainly down to the noticeable increases in support staff job cuts across the sector”.