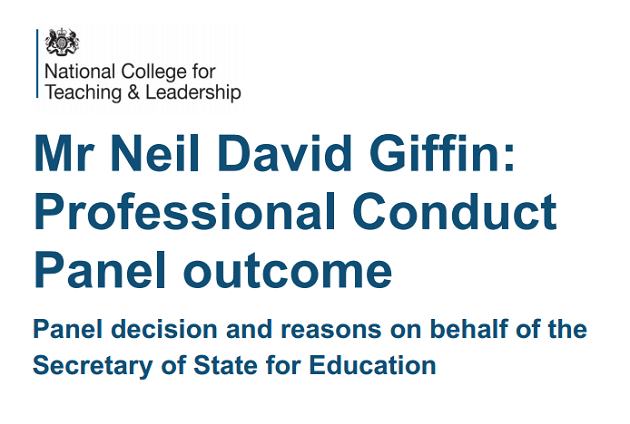 A teacher who rose to national prominence when he featured on the Channel 4 programme Educating Yorkshire has received an indefinite teaching ban after admitting having sex with two ex-pupils and communicating inappropriately with three others.

Neil Giffin has been suspended indefinitely from teaching by Education Secretary Nicky Morgan after a panel of the National College for Teaching and Leadership (NCTL) found he had engaged in unacceptable professional conduct and conduct that may bring the profession into disrepute.

The panel heard that Mr Giffin had admitted setting up fake Facebook accounts while on the teaching staff at Thornhill Community Academy and communicating with former pupils he had taught at Bishop Heber High School, his previous employer.

The panel heard that Mr Giffin had admitted communicating inappropriately with three former pupils, including one with special educational needs, over social media and had sex with two others, both of whom were aged over 18 at the time.

Recommending Mr Giffin’s suspension, the panel said the “pattern of behaviour” referred to in the report led to “concerns that there may be a continuing risk, and indicates a deep-seated attitude potentially leading to further harmful behaviour”.