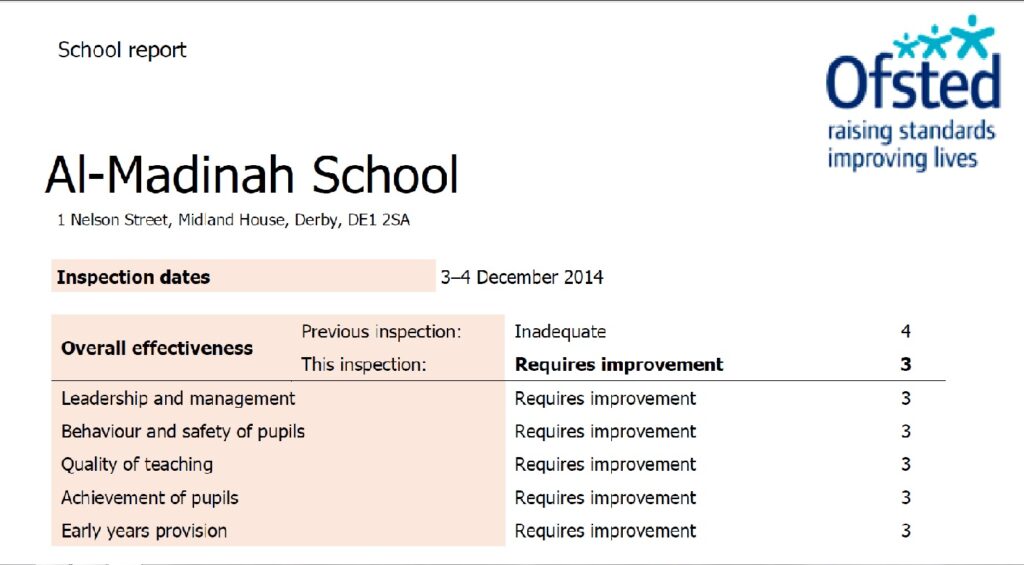 Al-Madinah School – a free school which had to change sponsor after a previous inadequate Ofsted rating – has now been told it requires improvement by the inspectorate.

Inspectors visited the school in December and its report, released this morning, said pupils in Key Stage 1 are “significantly below” what is expected in reading and writing, and teaching is inconsistent, although improving.

The Islamic faith school in Derby, which opened in 2012, was ordered last year by schools minister Lord Nash to close its secondary school after its inadequate rating. The school was labelled “dysfunctional”.

Concerns were raised by inspectors about the leadership and management, saying they “do not always carry out their duties rigorously enough to ensure that initiatives are implemented well”, but said headteacher Suzanne Sutherland had set up “strong” systems for tracking pupil progress.

Ms Sutherland was put in place after the previous Ofsted inspection, and the report said she had a “clear vision” and the staff “overwhelmingly trust and support” her.

The new governing body was also praised, with inspectors saying they are “key” to its success, and members of the trust board are “skilled and knowledgeable”.

Inspectors added: “The school has a range of opportunities for pupils to gain a good understanding of faiths and cultures other than their own, including visits to holy places of worship and other faith schools.

“Pupils spoke passionately to inspectors about the recent school commemoration of Remembrance Day. Pupils are being well prepared for life in modern Britain.”

A Department for Education spokesperson said: “We welcome Ofsted’s report in to Al-Madinah, taking the school out of special measures in less than a year. It is clear the school has made progress in every area and is benefitting from the strong leadership of the headteacher and governing body.

“However there is still more to do. We are not complacent and will continue to support Sir Barry Day and the staff, students and parents until we are confident that every child is receiving the high quality education they deserve.”