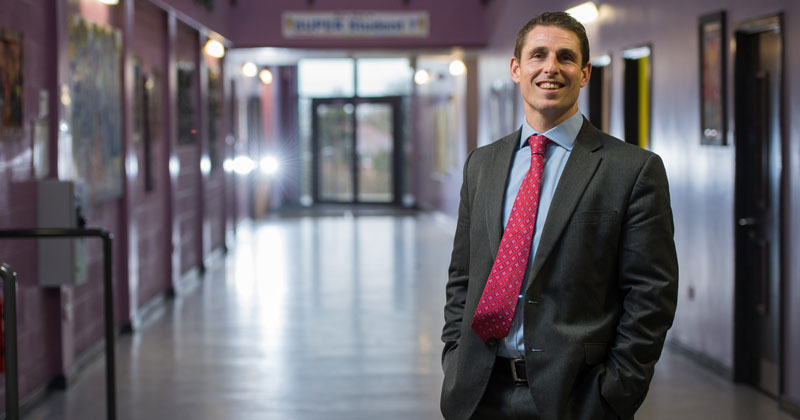 Harrop Fold, the Salford secondary school that featured in the Channel 4 documentary Educating Greater Manchester, has been placed in special measures by Ofsted.

Although the report from inspectors who visited the school at the end of last month has not yet been published, the outcome has been announced by Salford Council. The school will now become an academy.

It follows the suspension and subsequent resignation of Drew Povey, the school’s headteacher, amid an investigation by the council into suspected “off-rolling” of pupils from the school. Upon resigning in September, Povey accused the council of a “heavy-handed” approach and of pursusing a “personal vendetta” against him. He and three other members of staff were suspended in July.

Practices include the inappropriate, informal exclusion of pupils, deliberate mis-recording of attendance and weak practice in staff recruitment

In a statement released earlier today, Salford Council said the school was “found to be failing to give pupils an acceptable standard of education as a result of long standing issues”, and said “potentially unsafe practices”, including potential off-rolling, were identified.

According to the council, “year 11 pupils [were] deleted from the school roll shortly before the date of the DfE January annual census, to be readmitted at a later date”. This “may mean those pupils exam results do not appear in school performance tables”, the council said.

Inspectors also found that attendance records were “inaccurate” because pupils who were known to be absent “had their register mark deliberately changed so that they appeared to be present”.

“In addition some pupils have been recorded in attendance and then left the school site,” the council added.

Furthermore, pupils were “sent home or allowed to leave the school premises (both with and without parents’ knowledge) without proper recording or appropriate process for exclusions”.

Recruitment of staff and completion of necessary suitability checks to work with children was also “weak”.

However, the council insisted that the school has “ensured such practices no longer take place” since September.

“I want to reassure all parents that, since the start of the September term, the interim senior leadership team provided by the local authority has stopped these practices,” said John Merry, Salford’s deputy mayor.

“Moreover, Ofsted inspectors highlighted the current leadership as a strength for the school.”

“The Ofsted inspectors have identified and highlighted unsafe historic practices at the school, along with poor performance and achievement,” he added.

“Practices include the inappropriate, informal exclusion of pupils, deliberate mis-recording of attendance and weak practice in staff recruitment. This has potentially compromised the safeguarding of pupils as leaders and staff have not been in a position to ensure that they are safe.”

Merry said the Greater Manchester Learning Trust, which currently providers interim leadership at the school, is “committed to working alongside a new academy sponsor to provide stability and support for as long as needed”.

“There has been a lot of speculation in the community regarding hidden agendas. Once again I want to reaffirm to everyone that the school, governors and local authority all want the same thing – for Harrop Fold pupils to be happy, safe and achieve their best.”

Ofsted will publish the full report in the coming days.

Povey said the description in the report was “unrecognisable from the school that I left in July”.

“The longer this situation goes on, the less surprised I am by the statements made, and the reports published about the school. Whilst we knew that we had challenges, what Ofsted describes shows just how quickly a school can be destabilised and take a turn for the worst.”

“It’s easy for a new team and the council to point the finger at the previous leadership and to take little responsibility for the current situation, when in truth it is of their making.”

He said his greatest sadness “lies in the fact that the report doesn’t seem fair”.

“In summary, this a sad day for Harrop Fold school and our community, but I believe people know what the school has, and is, capable of achieving.

“From the TV cameras in school that have captured the brilliance of the students and staff, through to the numerous senior leaders, from both public and private sectors, that have visited and fallen in love with team Harrop – they can’t all be wrong, and they can’t all have been fooled.”