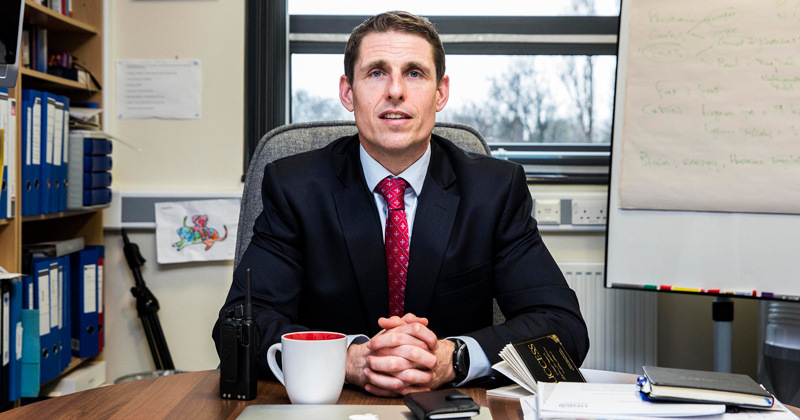 The school featured in a major Channel 4 series this year is struggling with historic debt of over £3 million, which its headmaster claims is “unfairly” preventing it from becoming an academy.

Harrop Fold, the subject of this year’s Educating Greater Manchester series, fell into debt in the middle of the last decade after it was put into special measures and was forced to spend substantial sums on turnaround support.

Paying back the debt in the face of stagnating budgets caused class sizes to balloon to 36 in some cases, while staff numbers have fallen by more than 60 per cent since 2010, which is “impinging on life chances”, according to its head Drew Povey (pictured).

“I never played the lottery until I found out about this debt but now I play it every Saturday,” he told Schools Week. “Honestly, if I win this weekend, I’d give the money to Harrop to get rid of this debt and I’d be back in work on Monday. I wouldn’t think twice about it.”

This thing we call education is a tough game

Povey took over as head when aged 32 at the turn of the decade, making him one of the youngest school leaders in the country. The deficit had already reached £3.1 million, and the school was told it must repay the amount. It has now returned £1.4 million, but more than half of the debt remains.

“We didn’t cause this debt, but I accept it, and I think we should pay it back to the local authority but I am frustrated that it is stopping us becoming an academy, and that is impinging on us doing our job,” he said.

Harrop Fold has been supported for more than two years by Consilium Academy Trust, which wants to absorb it into its chain, but the Department for Education has refused the application on account of the debt.

“I totally get why people don’t want big deficits brought across, or multi-academy trusts laced with deficits from schools,” he said. “But I think ours is different given the make-up of the debt, and I think we need special dispensation. We will pay it back, all we need is agreement on the terms.”

Schools which fail Ofsted inspections and are forcibly taken over by academy trusts can have their debts written off. Figures released last week showed the government handed millions to academy sponsors, in some cases to wipe out deficits at schools they took over.

Bolton Wanderers Free School, located less than a mile from Harrop Fold, also closed over the summer with over £600,000 of outstanding debt which is expected to be written off.

“If our school was so bad that it had to be closed, or taken over by someone else, we could get ourselves out of this debt,” said Povey. “But I can’t do that to our children. I won’t do a bad job just so that we can avoid this problem.”

But without becoming an academy, he said the school cannot build the sort of central capacity other schools are developing, especially in terms of curriculum support – which is especially necessary given so many new exam specifications.

“I think a loan should be created, and then we’ll pay it back to the local authority, one way or another, but to stop us from being able to become an academy and stop life chances of kids because of a debt we didn’t create and therefore we can’t convert seems wholly unfair,” he said.

Povey has been pleased by the positive reaction of the public since the television series started last month.

“I think it is because we’ve created this culture where it is safe for pupils to be who they are. It’s safe for them to come into school and feel part of something. We do have some challenging kids, but they leave that at the door,” he said.

“It sounds all a bit cheesy, but I also want the Educating series to be an honest depiction. I want people to see the hard edge of what kids and staff go through on a daily basis. This thing we call education is a tough game.”