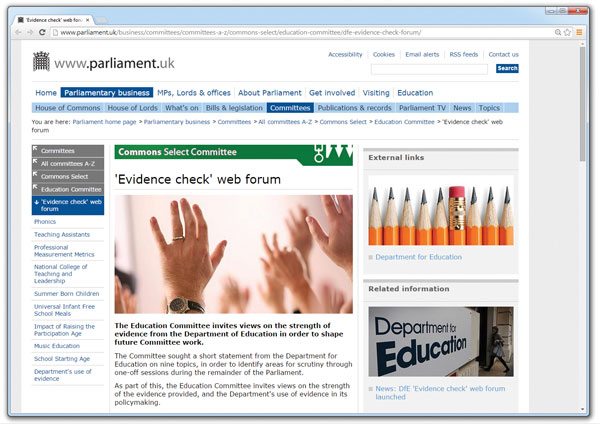 The education select committee has started to receive responses after kicking off a new way of crowdsourcing public views on the evidence behind education policy.

Comments have been invited on nine policy areas, and will inform the committee’s choice for a number of one-off hearings next year.

Views are solicited via a web forum, with close to 250 comments received to date.

The call for comments also covers the Department for Education’s (DfE) use of evidence in general.

Summer-born children and school starting age have received 45 and 43 comments respectively, but discussion of the evidence behind universal free school meals for infants has attracted just three. The National College of Teaching and Leadership has not prompted a single comment.

The page set up to collect views on the DfE’s use of evidence topped the list with 118 contributions, although most comments were on the government’s controversial policy on term-time holidays after a consultation was promoted by campaign group Parents Want a Say. Many are strongly critical of a policy described by one as “ill thought out”.

Since last September, pupils can only be taken out of school during term time in exceptional circumstances and parents face fines if they take their child away without permission.

The DfE has produced two-page documents on each area for the committee, setting out the department’s policy and the key evidence that informs it. These are available for anyone wanting to comment.

While other parliamentary select committees have run web forums to gather comments on topics for future agendas, the focus on a department’s use of evidence represents a departure from the norm.

Unlike in the run-up to previous general elections, the move to fixed-term parliaments gives select committees greater certainty on how many sessions they will be able to hold.

A number of the education committee’s major inquiries, including one on personal, social and health education, and one on apprenticeships and traineeships, are expected to be wrapped up some time before the May election, leaving it time to hold one-off sessions.

Comments are being received until midday on December 12. The forum can be found at: www.parliament.uk/