Pupils with English as an additional language outperform native speakers if they join English schools at a young age, according to government data.

A new report, released today, shows that last year EAL pupils who joined an English school in reception were slightly more likely to reach the expected standard in reading, writing and maths at the end of key stage 2 than those whose first language is English, with 68 per cent hitting the target compared to 65 per cent of native English speakers.

This pattern continues at key stage 4, with EAL pupils who joined an English school before year 2 having a higher average attainment 8 score that pupils whose first language is English.

But the chances of EAL pupils outperforming their peers declines the later they arrive in English schools. Those who joined an English school after reception are less likely to reach the expected standard in reading, writing and maths than their peers even if they joined in year one, while those who join after year 3 are less likely to have a higher attainment 8 score. 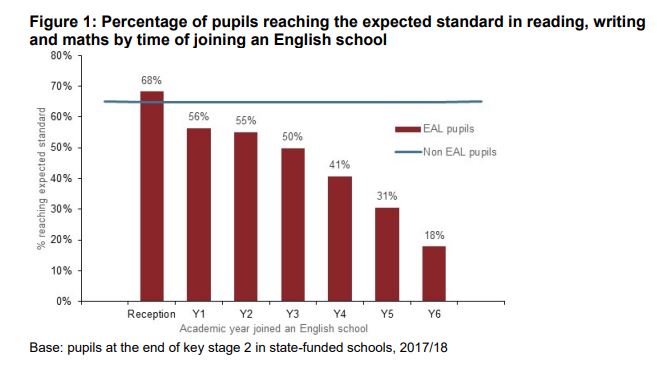 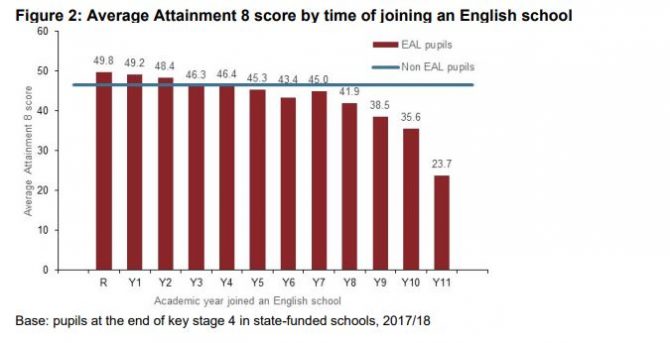 However, last year the Education Policy Institute and the Bell Foundation warned that attainment scores for EAL pupils are “profoundly misleading” and “distorted” because the huge disparity in achievement is masked in official statistics as so many children from different backgrounds are grouped together.

The report said the government should add a “late-arrival premium” to its national funding formula to pay for additional support for EAL pupils.

According to 2016 figures from the Department for Education, EAL pupils achieved similar attainment scores to the national average and better than average progress during school. They were also more likely to achieve the English Baccalaureate than those with English as a first language.

This can vary between pupils who have lived in England all of their life and are likely to have been fluent from a very young age, and those who have arrived in the country very recently and have little understanding of the language.

The data release is the latest around social mobility over the past few days, ahead of education secretary Damian Hinds’ speech on the issue today.

The final analysis for the children in need review was published on Sunday. It found that children who were in need of social care services were 50 per cent less likely to achieve a strong pass in English in maths GCSEs.

Pupils who were in need at some point in the four years leading up to exams, but not in need in the year of their exams, were between 25-50 per cent less likely to achieve a strong pass.

It found that having special educational needs was associated with the “largest penalty” – accounting for an attainment deficit of around 17 grades at key stage 4.