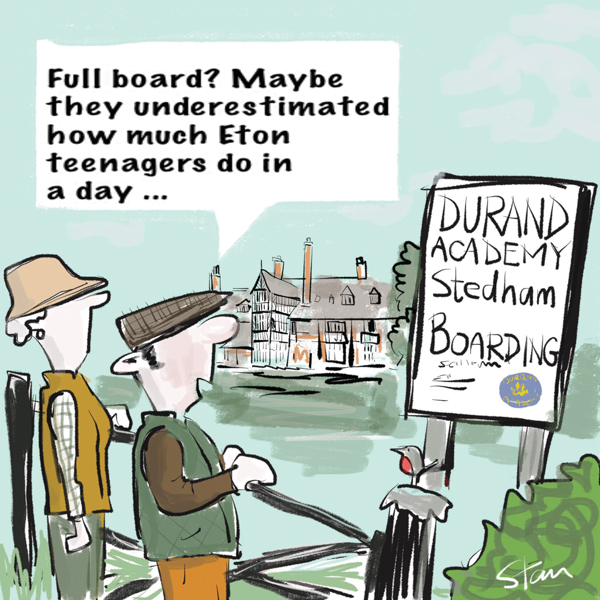 South London’s Durand Academy opened a satellite boarding free school in Sussex in September 2014. It was the first in the country not to charge parents for boarding services, and places were given to 49 of the school’s existing year 8 pupils, who were bussed from Lambeth and stayed at the school from Monday to Friday.

But figures in Durand Academy Trust’s annual accounts for 2014/15 show the school spent £765,130 providing boarding facilities, while only receiving an income of £289,093 towards the scheme from its commercial arm London Horizons Limited, which runs the school’s leisure facilities.

When the school was first planned, its founders said the school would be able to run for as little as £2,051 per head for 375 pupils, a figure described by the then headteacher of state boarding school Wymondham College, Melvyn Roffe, in early 2014 as “implausibly low”.

Durand said in its plans that the cost of providing boarding services would be significantly lower than those incurred by other boarding schools, as a result of an extended school day , which lasts from 8.15am to 9.30pm and could therefore be funded from government cash. This kept down the cost of designated boarding hours, which are usually subsidised by parents, but, in the case of Durand, were planned to be subsidised by philanthropy.

Robin Fletcher, director of the State Boarding Schools Association, said he would not comment on Durand’s accounts, but confirmed his organisation usually assessed the cost of boarding as being “between £10,000 and £12,000 a year” per pupil, or between £50 and £60 a day for “accommodation, food, medical care and pastoral supervision” based on a seven-day week.

Addressing Durand’s original claim to be able to run boarding provision for around £2,000 a year, Mr Fletcher said: “I don’t think I can really comment on how one school is modelling it, but what I can say is that the average for the sector is higher than that.”

Durand Education Trust, which owns the land where both schools operate, remains under investigation by the Charity Commission over conflicts of interest, and after the school was criticised by MPs for the “gobsmacking” £420,000 salary paid to former executive headteacher Sir Greg Martin.

Sir Greg, now vice-chair of governors at Durand, was asked about the deficit but insisted it was a “ground-breaking school”, which offered “huge opportunities” to children in Lambeth, including through “innovative projects such as the boarding school”.

He added: “Inevitably, this means our finances are more complex than other schools.”

In a statement, he said staff and governors were “focused on delivery, outcomes and achievements” and would not be commenting further on the school’s finances.

Instead Sir Greg said Schools Week should challenge the government and the prime minister “to justify why they are failing to deliver on their supposed commitment to offer working class children access to the premium Eton style education that they enjoyed, and that Durand is already delivering.”