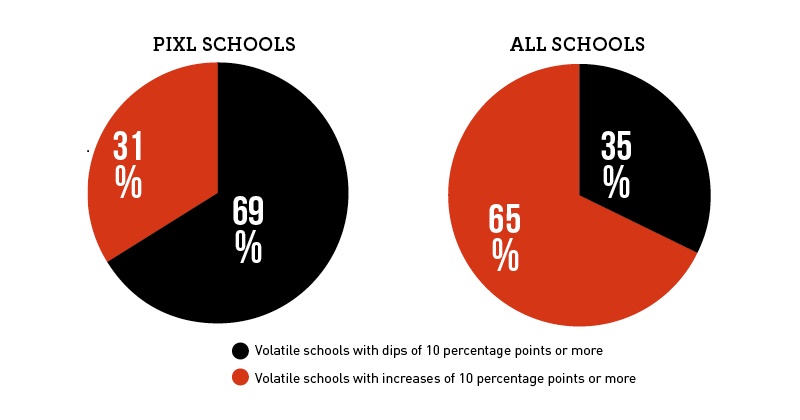 Schools Week analysed last year’s GCSE results for nearly 600 PiXL schools to try to ascertain whether their scores were more volatile than average.

The Ofqual study shows that the more schools shift pupils into different qualifications, the more likely they are to have volatile results.

It is well-documented that PiXL advises school members on which qualifications to target. Not every school will act on such advice, but the schools may be more likely to shift pupils if they follow the group’s advice.

Using a list of schools due to renew their PiXL membership at the end of last year, we analysed the difference in their GCSE results from 2014 to 2015.

But only one-third of schools with large fluctuations experienced a decrease. The other two-thirds increased their results by 10 per cent or more.

This pattern flipped in PiXL’s schools, with highly variable results. Results dropped in more than two-thirds of schools with a change of over 10 per cent in their exam results (69 per cent), while it increased in only 31 per cent.

When presented with our analysis, PiXL said it was not accountable for schools’ results, but was accountable to headteachers for the work it did to support schools.

WHY IS ENGLISH SO VOLATILE?

English GCSE had the greatest volatility of any qualification last year – with schools boosting their exam scores by an average of more than six percentage points.

The average change in GCSE results from 2014 to 2015 for all other qualifications in the Ofsted study ranged between plus or minus 2.5 percentage points.

Why was the figure so high?

The Ofqual report said GCSE English had an instability in its overall cohort entry size.

Many schools had entered all or some candidates for alternative qualifications, such as iGCSEs.

But alternative qualifications were not included as part of the analysis. An Ofqual spokesperson said: “This means that centre variability for English/English language tends to show a lot of variability with centres doing ‘better’, but it does not tell us what the centre variability looks like if we piece together centre outcomes for GCSE+iGCSE+level1/2 certificates in English. This would probably show much more stability.”