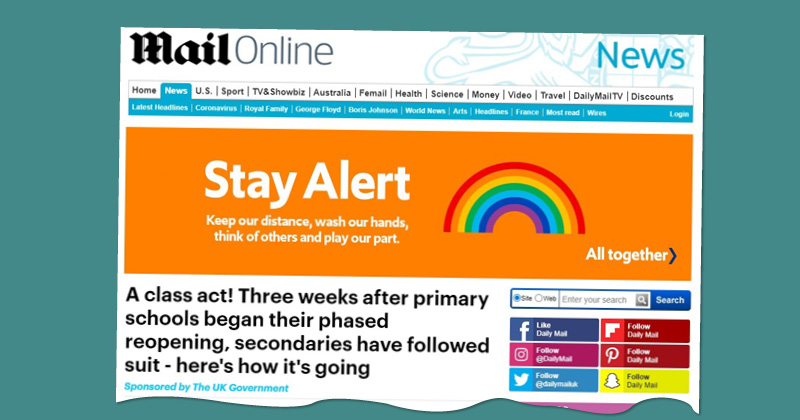 The government has spent tens of thousands of pounds in an attempt to present its response to the impact of coronavirus on education in a positive light.

The Department for Education diverted an external PR agency promoting teaching vacancies to highlight its efforts to boost remote learning. It reallocated about 10 per cent of a £117,500 contract.

The government also splashed out on a sponsored post on Mail Online presenting the positive experiences of schools that reopened in June.

The PR offensive comes as public trust in the government’s response to Covid-19 plummets.

YouGov polling shows that the proportion of people in the UK who think the government is handling the crisis well was at 44 per cent on June 26, down from 72 per cent in late March.

The government has faced fierce criticism for how it handled closures after some schools refused to reopen on June 1. Ministers then abandoned plans for all primary pupils to go back before summer.

Gavin Willamson, the education secretary, is also losing popularity with Conservative Party members. A recent poll by ConservativeHome put his net satisfaction rating at -19.8. The only cabinet minister who fared worse was Robert Jenrick, the communities secretary, who is facing calls to resign for his role in a development project proposed by media boss Richard Desmond.

Last month, Four Communications, a PR firm that describes itself as “one of the leading integrated marketing agencies in the UK and the Middle East”, contacted journalists on behalf of the DfE, offering “content and advice and interviews from teachers and schools who are successfully working remotely”.

The press release also set out how the DfE had “committed over £100 million to boost remote education and this includes up to £2,000 per school to help them set up effective digital education platforms”.

The DfE said time already contracted with the agency was switched following Covid-19.

“We reallocated the remaining hours of the contract to support the promotion of educational platforms and to ensure schools make the most of the tech support through the demonstrator schools programme.” 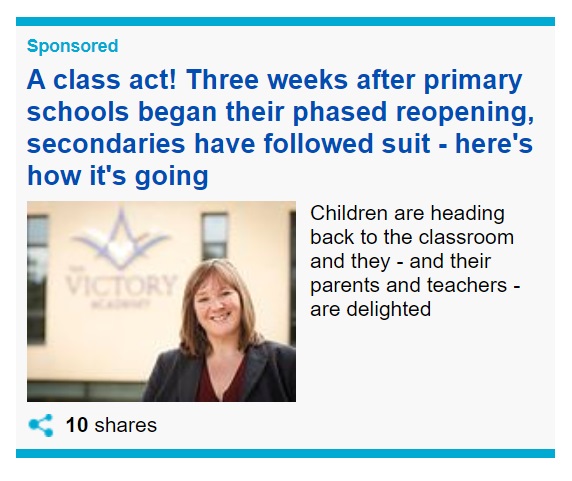 How the sponsored post appeared on the Mail Online’s homepage

Included in the piece were interviews with the leaders of the Victory Academy in Chatham, Kent, and Bonneville School in Lambeth, south London, along with a factfile-style boxout on “the benefits of going back”.

The DfE said the press partnership that produced the advertorial was “part of the government’s wider ‘Stay Alert’ campaign, led by the Cabinet Office”, and that it was working with a “wide range of media outlets to share stories from teachers who have been supporting children across the country throughout the Covid-19 pandemic”.

The department also said the interviews had been carried out by a journalist, independent of the DfE, and that the costs of the campaign “will be published monthly on a rolling basis as part of routine government transparency”.

Mandy Gage, the principal of the Victory Academy, said her school had been approached by the DfE and was “happy to take part”.

“We hope that explaining the work we have done to make our school as safe as possible has been helpful and reassuring for both our students and their parents, and for those at other schools.”

The department would not say how much it had spent on the post, adding that such spending was outlined in Cabinet Office transparency data – which did not break advertising spending down by individual outlet.

Ben Verinder, who runs a PR agency that specialises in education, said: “It appears that the DfE has chosen to spend money on advertising as part of a campaign to reassure parents who are worried about sending their children back to school in September.

“However, it’s the experience of school and how safe they judge it to be that will determine the attitudes and behaviours of parents in the autumn. That in turn will be shaped by the support that schools receive from the government and others, rather than by adverts or any other kind of promotion.”