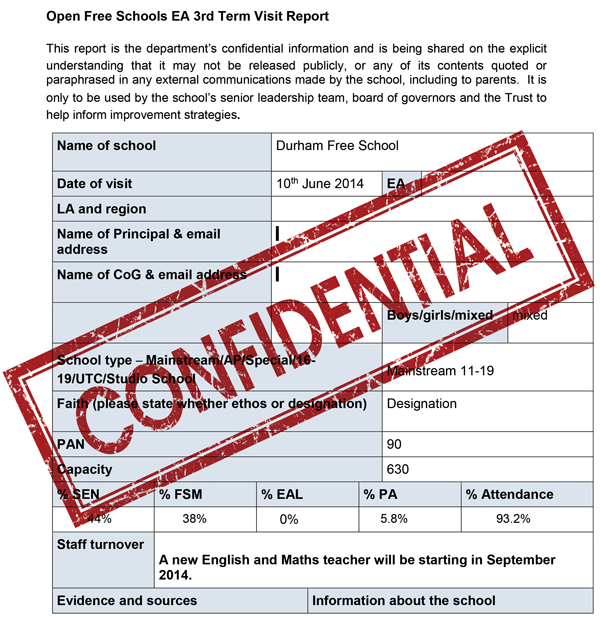 A free school faced with closure after Ofsted called its pupils “racist” has released a confidential Department for Education (DfE) monitoring report which just five months earlier stated that pupils were “respectful” and behaviour was of a “high order”.

The school was placed into special measures last Monday; later that day education secretary Nicky Morgan told the House of Commons that she was removing its funding.

Durham Free School governors have now released documents which show the DfE describing the school as “successful” and promoting a “positive attitudes” in pupils.

This contrasts with Ofsted’s damning verdict after a November visit in which the report said the school had allowed a culture in which pupils used “racist words and sexually derogative and homophobic terms”. It said both teaching and assessment were weak.

The DfE monitoring visit was carried out last June, as is routine with all new free schools before an Ofsted inspection takes place.

All monitoring reports come with a warning from the DfE that it is confidential and only for the school’s senior leadership team, board of governors and the trust.

Set out in a similar fashion to Ofsted’s official reports, the document includes headers such as “quality of teaching”, “behaviour and safety of pupils” and “quality of leadership in, and management of, the school”.

In the Durham Free School form, DfE officials said: “The headteacher, senior leadership team and governors demonstrate an ambitious vision for the school and high expectations of all pupils and teachers. They have created a successful free school securing good teaching and promoting positive attitudes to learning in their pupils.”

The school, which now faces closure, has until Tuesday, February 3, to appeal Ofsted’s verdict.

Chair of governors John Denning said: “The monitoring report does not say the school is failing, it does not say it requires wholescale change and it does not indicate in any way that it is a school that could ultimately close.”

Mr Denning said governors believed DfE officials had missed “significant failings” in the school leadership and had since then started the process of removing the former headteacher.

“It does say work still needed to be done, but its overall tone is positive and even suggests that a ‘good outcome’ at any subsequent inspection was possible.”

This week, the school’s acting headteacher said he was concerned about “aggressive” pre-emptive letters from the county council asking parents to sign their children up to different secondary schools in the area.

Julian Eisner said: “There is a lot of disquiet over the speed at which the LEA is moving on this, and the deadline they have given to parents seems to pre-empt the Secretary of State’s final decision.”

Ms  Morgan said: “We will not tolerate failure in our schools and it is one of the great strengths of the free school programme that we can identify and deal with it quickly in a way that is not possible in all schools.