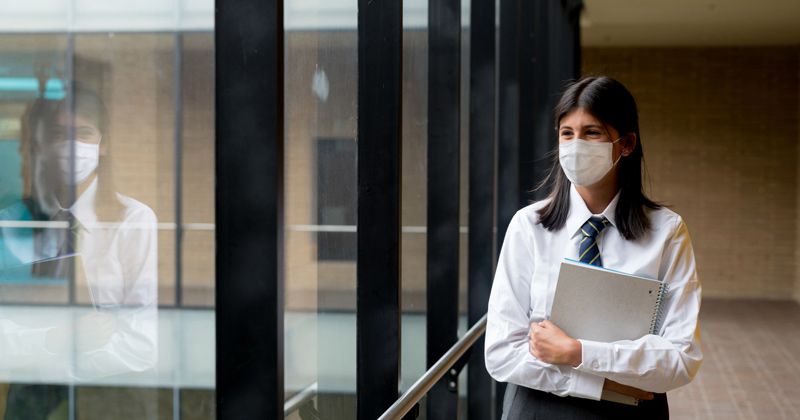 The DfE has made a rapid U-turn over plans to relax face covering guidance for pupils on public transport and school buses.

Guidance for schools about step four of the relaxation of Covid restrictions was revised on Tuesday, just eight days after it was published and before the changes even take effect next week.

The operational guidance first published on July 6 stated that from July 19, face coverings were “no longer recommended to be worn on dedicated transport to school or college and are no longer legally required on public transport”.

But a tweaked version now reads: “From July 19, the government is removing the requirement to wear face coverings in law but expects and recommends that they are worn in enclosed and crowded spaces where you may come into contact with people you don’t normally meet.

“This includes public transport and dedicated transport to school or college.”

The government still says face coverings will no longer be advised in classrooms or communal areas.

But it is not clear if public and school transport are the only areas that count as “enclosed and crowded spaces” where pupils may encounter others they do not normally meet, or if parts of schools may be covered by it too. The DfE has been approached for clarification.

Separate coronavirus guidance on school transport has been revised too.

It states that the government recommends children and young people aged 11 and over “continue to wear a face covering when travelling to secondary school or college” on dedicated transport. It previously said pupils can “wear one if they wish”.

The government’s decision to end legal requirements on face coverings has proved controversial, with London mayor Sadiq Khan announcing on Tuesday he would use his powers instead to maintain the rules on Transport for London services.

It had already ditched the recommendation that students and staff wear face coverings in class in May, with only adults currently advised to wear them and only in communal areas.

Unions have been calling on the government to reintroduce stricter face covering rules within schools, amid alarm over rising Covid-19 infection rates and high absence levels as bubbles self-isolate.

A Department for Education spokesperson said: “In line with the latest health advice and wider government position, we expect pupils to continue to wear face coverings on public transport to and from school or college.

“This includes dedicated home to school transport, where pupils are more likely to mix with pupils in different age groups, and where there is no impact on their education.”