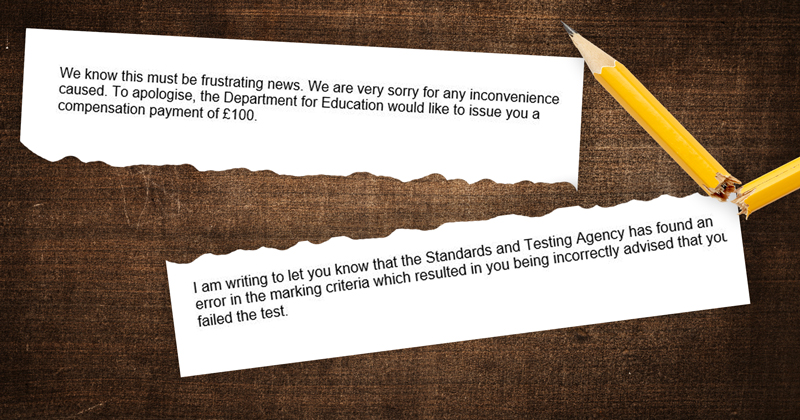 The Department for Education is facing legal action after offering an “insulting” £100 to compensate would-be teachers it incorrectly failed on skills tests needed to progress to teacher training.

New figures seen by Schools Week reveal nearly 700 candidates were wrongly told they had failed the QTS tests in numeracy and literacy.

An error in the mark scheme that has been in place for at least ten years was only discovered last year.

The Department for Education has identified and contacted the candidates affected, years after they were wrongly told they failed the tests, offering them £100 in compensation for the gaffe. One recipient called it “insulting”.

Some would-be teachers, who have since taken up lesser-paid jobs, now plan to sue the government over losses of potential earnings.

Is this really an apology? When my son and others have had their dreams pulled out from underneath them, through no fault of their own

Caroline Barton Byrd said her son was told this week that he had actually passed. He had felt like a “failure” after the test and was now studying an unrelated course at university.

She said he would have been a “fantastic” primary teacher, and the compensation barely covered the £80 train fare he paid from Kent to Stratford to take the test in the first place.

“It’s a disgrace. It’s insulting. Because of their error, my son and other young people have had the whole course of their life changed.

“Is this really an apology? When my son and others have had their dreams pulled out from underneath them, through no fault of their own?”

Figures published this week show 696 candidates failed the test between 2014 and 2017 when they should have passed, although 528 of these passed at a later date.

In 2017 alone, 200 candidates were mistakenly told they had failed the test, designed by the Standards and Testing Agency. The marking scheme “incorrectly scored the answer to a multiple-choice question”.

Neil Hassell, the headteacher of Hemel Hempstead School, said a former pupil wanted to return as a teacher, but was told three years ago he failed the tests.

He works at the school as cover supervisor, but is now seeking legal advice from his union after being “devastated” to receive an email from the DfE on Tuesday.

The number of would-be teachers wrongly failed by the DfE

Hassell said: “He’s a really skilled, important member of my staff who has had his dream shattered, and would be a fantastic teacher. For the DfE to acknowledge that with nothing more than an offer of £100 and an email, I just don’t think it’s acceptable.

“What message does that sent to the profession, when we’re in the middle of a teacher recruitment crisis?”

An email sent to affected candidates from PSI, the company that delivers the tests, read: “We know this must be frustrating news. We are very sorry for any inconvenience caused.”

Danielle Lewis-James, a senior associate at law firm Slater and Gordon, told Schools Week the would-be teachers could demand more compensation as the error could be a breach of duty of care.

It’s insulting. Because of their error, my son and other young people have had the whole course of their life changed

If someone was forced into a lower-paid job as a result, they could claim for the difference in salary – if they could show the loss was the direct result of the error and would not have happened otherwise.

“They’re not going to dig too much into how much they owe anybody. They’re just going to look at it superficially. Half are likely to accept it, and then they’ve saved a ton of money,” she said.

“I would write back to the DfE and say ‘I don’t accept your offer and the reason I don’t accept it is because I’ve suffered loss from your breach’ and tell them how much the loss is.”

A spokesperson for the DfE said the error was identified during “a routine review of marking schemes” last year.

“It was immediately taken out of use and the department has contacted a number of people who have been adversely affected as a result.”

In February last year, the government removed the lock-out policy that prevented anyone who failed the tests three times in a row from taking it again for 24 months.

This came after Schools Week reported almost 5,000 prospective teachers failed three times in 2015-16, shutting them out of the profession for at least two years.