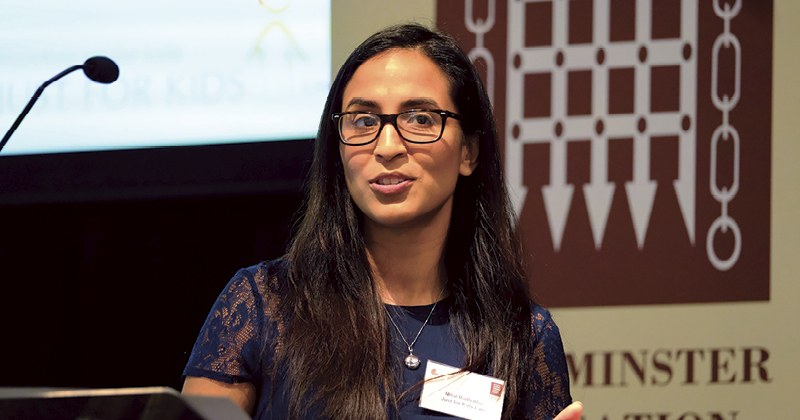 The government “needs to do better” for pupils in alternative provision, says a senior civil servant following claims that teens have been left in “grotty” institutions with an “ad-hoc” approach to safeguarding.

Harriet Becher, the deputy director of the Department for Education’s disadvantage division, said outcomes for children attending pupil referral units were “not good enough”, after complaints from delegates at a Westminster Education Forum in central London last Friday about the quality of provision.

But she also sought to play down a rise in the rate of school exclusions, despite the number of permanent and fixed-term exclusions increasing for the third year running. She said the rise was “not necessarily a bad thing”.

Pupil referral units (PRUs) provide education to pupils excluded from mainstream schools, whether permanently or for a fixed term, but campaigners say that some schools use them to boost  league tables.

Mital Raithatha (pictured), an education and community care solicitor at Just for Kids Law, told the Westminster event that in some cases the units were a “back door to an exclusion”, adding: “We are finding some students, especially those doing their GCSEs, are just left there.

Some students, especially those doing their GCSEs, are just left there

“The theoretical six-week period where they’re reviewed to see if they can be integrated back into mainstream education is completely ignored,” she said.

Raithatha was backed by Richard Watts, chair of the Local Government Association’s children and young people board, who said some schools were using alternative provision to “remove children from the denominator of a school’s GCSE league table performance”.

His comments have been back by Education Datalab research that suggests that some schools might boost results by removing more challenging pupils before these exams.

The government is hoping new rules from the Education for All white paper, requiring schools to retain responsibility for pupils enrolled at PRUs, will address the problems. If implemented, the grades of excluded pupils will count in performance figures.

Sheena MacDonald, from the inspectorate, told Friday’s event that some  provision she had visited had been “pretty grotty” and admitted there was “a bit of ad-hockery” around important issues such as safeguarding.

Becher admitted that just 1 per cent of pupils in AP came away with five GCSEs including English and maths, compared with almost 60 per cent of all children. That rate was “not good enough. We need to be doing better.”

“I don’t think we think that’s necessarily a bad thing,” Becher said. “If exclusions are being made, we’re trusting headteachers to make the right decision for their pupils and there is a process in place to ensure exclusions are reasonable and fair.”