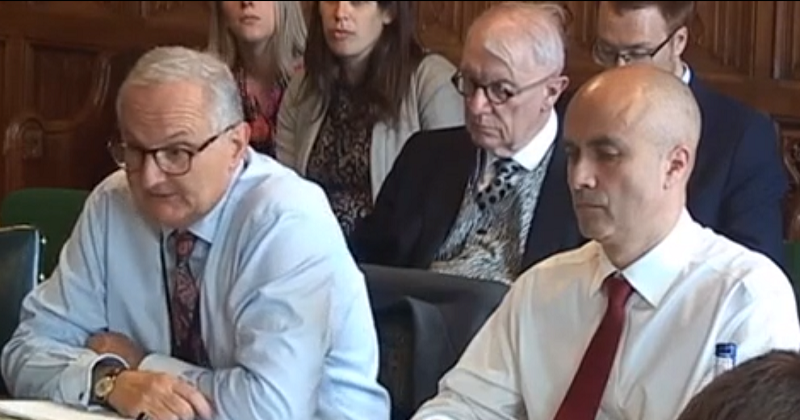 Academies minister Lord Agnew faced a grilling from MPs this morning over school funding, academies, exclusions and other issues facing the education sector.

He appeared alongside Dominic Herrington, the national schools commissioner for England.

1. Bill for cost-cutting advisers will rise to £4m

Agnew announced this morning that he expects his new network of school resource management advisers to carry out 800 visits, at a cost of £4 million.

Last year, it was revealed that the scheme would initially cost the Department for Education £2.3 million.

But the minister said this morning that an expansion of the scheme is on the cards, with each report costing around £5,000 to produce.

Asked if the SRMAs achieve value for money, Agnew said: “I can absolutely assure you it is and we will produce a summary of the first 70 or so in the next few months to prove that.”

2. School savings advice has been ‘taken out of context’

Faced with questions about recommendations made by his network of school cost-cutting advisers, Agnew again claimed their reports have been taken out of context.

He was grilled by MPs about a Schools Week story last month that reports included recommendations to limit lunch portions for pupils to save money, as well as keeping money raised for charity and running three classes in a school dining room to save cash on supply spend.

He also said his comments last year betting schools a bottle of Champagne that he could find more savings for them were taken out of context, despite having previously told Schools Week that he deliberately made them to “stir up a bit of controversy”.

3. Progress on academies ‘not as fast as we’d like’

Lord Agnew told the committee that thanks to the academies programme, 500,000 more pupils are in ‘good’ or ‘outstanding’ schools.

But he admitted that progress in school improvement through the programme “isn’t as fast as we would like”.

“But I think people do forget the extent of the change the academisation programme has brought to education. When you’re doing something at that scale, it does take time to flow through.”

Asked about problems with finding good academy sponsors, Agnew denied there was a shortage of sponsor capacity in the system, explaining that his department is focused on boosting the capacity of existing sponsors.

Herrington told MPs that 73 per cent of MATs have between one and five schools, and that this is where the capacity-building efforts will focus.

“We think there’s capacity within the existing sector,” he said.

5. Private schools must be ‘more innovative’

Grilled on the Conservatives’ 2017 election manifesto pledge to make private schools work harder to support state schools, Agnew said he had seen some of their efforts, but agreed change wasn’t happening fast enough.

He said independent schools must be “far more discriminating” with scholarships, and spend their money on means-tested bursaries rather than “giving a wealthy parent a scholarship just because they have a bright child”.

Agnew also insisted he had been “frank” with the Independent Schools Council that they “need to move at pace to maintain their place in our system”.

He also pointed to other ways private schools can help the state sector. In one scheme, Eton College pupils visit a free school in Slough to coach maths GCSE pupils.

“I do think the independent sector needs to be more innovative in how it can help,” Agnew said.

Ministers believe there has been a “substantial increase” in the number of pupils being home-educated in England, and are worried about it, Agnew said.

While there are “tens of thousands of parents who are good home-educators”, Agnew said he remains “very worried about those who are not doing it properly and the impact it has on those children”.

7. The ‘other’ category for exclusions has to go

Agnew told MPs he “entirely supports” calls for a change to the reporting system for school exclusions, which currently allows the reason for around a fifth of exclusions to be labelled as “other”.

Amanda Spielman, the chief inspector of schools, has also recently backed calls for the category to be scrapped.

Speaking today, Agnew said he was worried about gaming of the coding system, which he described as “completely labyrinthine and a number of the codes don’t have to be reported”.

8. Government will ‘tighten accountability’ around exclusions

Confirming revelations in a Schools Week exclusive from February, Agnew told MPs that the long-awaited Timpson review will propose that schools that exclude pupils will keep “some ownership of that child’s progress”, and that “we are proposing that the accountability be tightened”.

Agnew and Herrington faced questions about a £16.1 million handout to the Academies Enterprise Trust to support its turnaround after years of problems with finances and standards.

This morning, Agnew admitted AET had grown “too quickly”, but insisted it was not “too big to fail”.

But asked why the recovery plan has not been made public, despite involving more than £16 million in public funding, Agnew and Herrington were hesitant.

Agnew insisted the plan was a “work in progress”, and insisted it was DfE policy “that we need to carry out the recovery exercise before publishing everything”.

He also said he would not give MPs a “blank cheque” to have access to a report “that I need to take advice on”, while Herrington warned the plan “could involve really sensitive things about professionals in that organisation”.