A number of specialist schools have decided to close in the coming days, with headteachers hitting out at the government for a lack of guidance over how to protect vulnerable pupils amid the coronavirus pandemic.

Just yesterday the Medicine in Specialist Schools steering group wrote to the government calling for clear guidance on how to protect their vulnerable pupils, some which have complex health and medical needs.

In a letter to the education secretary, they suggested closing the schools, or that head teachers could respond to an instruction to identify pupils with elevated risk so their parents could be told to self-isolate with these children at home.

Schools Week knows of at least five of these schools which have confirmed today that they will be fully or partially closed.

The general schools guidance around COVID-19 is that unless a school has been directly advised to close by Public Health England, it is recommended all education settings remain open.

But the group wanted specific advice relating to this group of vulnerable children. The latest health guidance, published last night, states those at increased risk of severe illness from coronavirus should be particularly stringent in following social distancing measures.

The group considered at increased risk include those aged under 70 with an underlying health condition (listed as anyone instructed to get a flu jab as an adult each year on medical grounds – see image below). 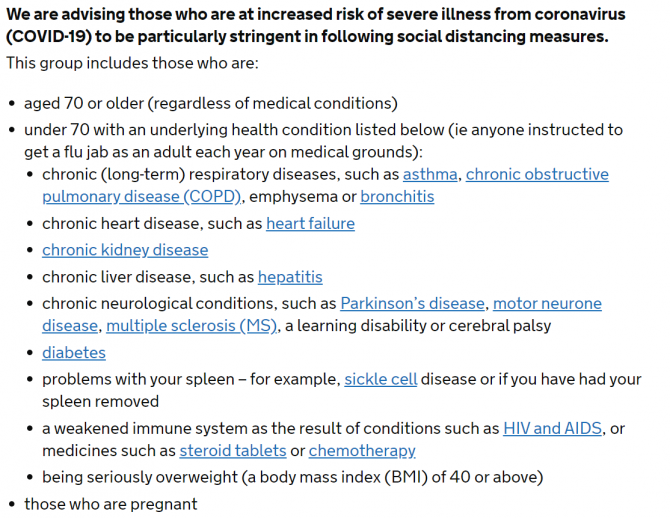 Dominic Wall, a special school head in Bradford and part of Medicine in Specialist Schools, said medical grounds in the guidance includes learning disability or cerebral palsy, and measures for social distancing include non-essential use of public transport, which many students have to use to get to school.

He said: “Having asked the question ‘have we got this wrong that schools should close’ and having not had an answer to clarify that we’ve got it wrong, we’ve assumed it’s straightforward guidance that its quite clear.”

He said some schools had also closed because of capacity levels where teachers have been self-isolating. New guidance issued by PHE yesterday stated that closures “may be necessary” in response to staff shortages.

Three Ways School in Bath is also closing. A spokesperson said this was because of the “medical nature of some of the children” as well as staffing levels.

Severndale Specialist Academy has decided to close as of tomorrow to those who fall under the “increased risk”  group. A statement on their website describes the decision as “extremely difficult”.

Headteacher Paul Silvester announced today that Newman School, which has about 145 pupils aged between 2 – 19, would be closing today for students, and tomorrow for staff. Children have been given work to complete at home.

He emailed the DfE twice within the last week as he was “waiting for some help”.

One on Monday said that “unfortunately we are unable to offer any specific medical advice about vulnerable pupils, therefore, we would advice that you dial the NHS 111 regarding this enquiry”.

It added that the current guidance states that even if there is a confirmed case of COVID-19, it is unlikely PHE would advise a school to close.

Silvester told Schools Week the responses were “beyond the pale”.

In a statement to parents he said: “We have many pupils who have significant health issues and high levels of anxiety and some who have been told to self-isolate from the weekend, it is simply not sensible to remain open, particularly as a large number of parents have taken the precautionary principle to keep their children off school. The anxiety of closing is now much less than then the increasing fear and worry about remaining open.”

All 10 special schools in Belfast, Northern Ireland, closed yesterday due to the pandemic, the BBC has reported.

Mainstream schools are also struggling to stay open with some partially or fully closing.

A DfE spokesperson added: “We recognise schools are facing numerous challenges as a result of coronavirus, and we are continually reviewing how best to support them… Special schools should work with parents and carers to agree if self-isolation is appropriate, and how support can continue to be provided.”

They are now recommending all residential special schools and colleges conduct a risk assessment both for the school and its vulnerable pupils to “identify how self-isolation measures should be enacted, if needed”.

They said this will involve working closely with local Public Health England health protection teams, clinical commissioning groups and, where appropriate, the child’s parent or carers.