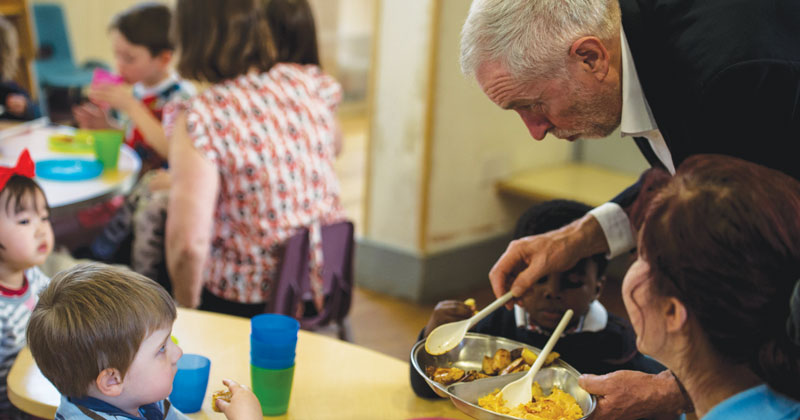 Jeremy Corbyn’s claim that councils that provide free meals to all primary pupils are boosting attainment and health has been dealt a hammer blow after local authorities admitted no such evidence exists.

The Labour leader has pledged to charge VAT on private school fees to raise £1.5 billion to pay for an extension of universal free school meals to all primary pupils, should his party win next month’s general election.

Shortly after announcing the policy, Corbyn told The Telegraph that that “very popular” idea was backed by research from councils that already provided the service. The research purportedly showed free meals tackled obesity and improved grades.

But two pioneering councils – Newham and Islington, both in north London – who introduced free school meals for all primary pupils in 2010, have told Schools Week they have carried out no research that would support Corbyn’s claim.

Anyone who claims evidence of health benefits is badly mistaken

When asked to provide the evidence, Labour pointed towards an Institute for Fiscal Studies (IFS) report from 2012 based on a separate two-year pilot of the scheme in Newham, Durham and Wolverhampton.

However, this report showed no increase in child health and concluded further research was needed before any link to improved attainment could be claimed.

However, the party failed to add the next sentence from the report that said packed lunches contained more fruit.

The report also does not examine the benefits of universal free school meals.

Andy Jolley, a school governor and education blogger, said it was “difficult to comprehend” how any officials reading these reports would “choose to use them to justify spending billions of pounds on universal free school meals”.

Other critics have said that extending the programme would “divert money from squeezed budgets to pay for children whose parents can easily afford them” and called on the Labour leader to provide the evidence that he suggested exists.

Universal free school meals were introduced in 2014 for children in the first three years of primary school to ensure they had at least one hot nutritious meal per day.

The Labour leader told The Telegraph: “All the evidence from those councils that do provide free school meals is that there are high levels of attainment, better levels of concentration and better health for all of the children.”

A spokesperson for Islington council, which is within Corbyn’s constituency, said teachers have told the council that children’s behaviour and concentration “have improved” as a result of the policy, but admitted the authority had not conducted any specific research.

Newham has not carried out any research for the free school meals policy, aside from being included in the 2012 IFS report.

Analysis of the pilots in Islington and Newham last July by The Mail on Sunday suggested children could even be getting fatter as a result of the scheme. National Health Service figures showed pupils classified as obese who left primaries in both areas rose by more than 1 per cent from 2011 to 2015.

Pupils reaching the required standard in English and maths SATs increased by about 15 per cent from 2011 to 2015. However, the rises were in line with those across London as a whole.

Pupils involved in trials in Newham and Durham made between four and eight weeks more progress over the two-year pilot than pupils from other areas, but no improvement was found in Wolverhampton.

The report’s authors said the reason for improvements in Newham and Durham were “not clear”. Child attendance, behaviour and health had not improved.

Labour’s Sharon Hodgson, chair of the all-party parliamentary group for school food, said that Corbyn’s policy allowed “for all children to reap the educational, behavioural and health benefits that come from having a hot and healthy school meal”.