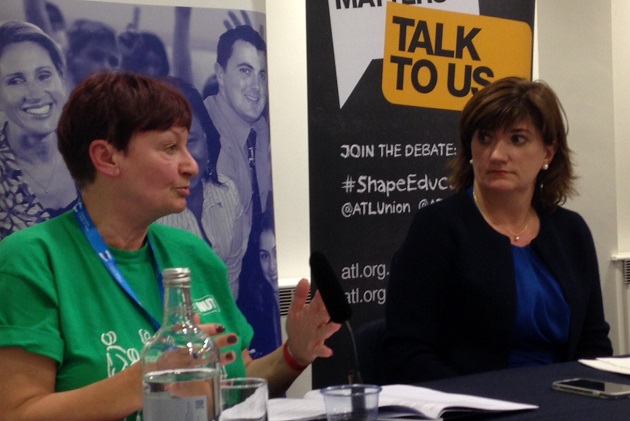 Nicky Morgan has clashed with trade unionists at the Conservative Party conference as she accused them of painting a “negative picture” of teaching.

During a heated debate at a fringe event organised by the National Union of Teachers (NUT) and Association of Teachers and Lecturers (ATL), the education secretary, pictured above right, said she was “outraged” by comments made by NUT general secretary Christine Blower, above left, about the impact early assessments such as baseline tests and the phonics check had on children from disadvantaged backgrounds.

Ms Blower, who was on the panel with Ms Morgan, University of Manchester Professor Neil Humphrey and Schools Week editor Laura McInerney, warned that children living in poverty arrived at school with “less advantage” than those who are not, and said too much testing at an early stage could further “constrain their primary experience”.

Ms Blower said: “And if what that means is that we then constrain their primary experience even further by chasing the goal of getting the literacy levels, then that, frankly, is a huge problem.”

Ms Morgan told the event she had “immense respect” for people who taught on the front line, but said she did not “recognise the picture” of teaching painted by Ms Blower, claiming the schools she visited were “full of wonderful classes with inspiring teachers”.

She added: “I came to this fringe meeting thinking I would be perfectly calm, but I’m now outraged by what I’m hearing.

“To sit there and say that just because a child’s from a disadvantaged background, it’s not fair to test them, what the hell is this about?”

She continued: “Frankly Chris, if you’re going to paint a negative picture of schools and teaching up and down the country, I think you’re letting your members down. I think you and Mary (Bousted, general secretary of the ATL) and other unions have got some fantastic teachers.

Ms Morgan said high expectations needed to be set “for all children in the country”, including those who come from “the most disadvantaged backgrounds”, adding that it was her duty as education secretary and the duty of “people working in schools” to help those children “do really well”.

She concluded: “I’d rather do it with the support of the teaching unions, but if I don’t have that support I will do it anyway.”

Ms Blower later said she agreed there were many fantastic teachers but that evidence from academic research suggested schools narrowed their focus on “teaching to the test” which reduced the curriculum offer in some places.