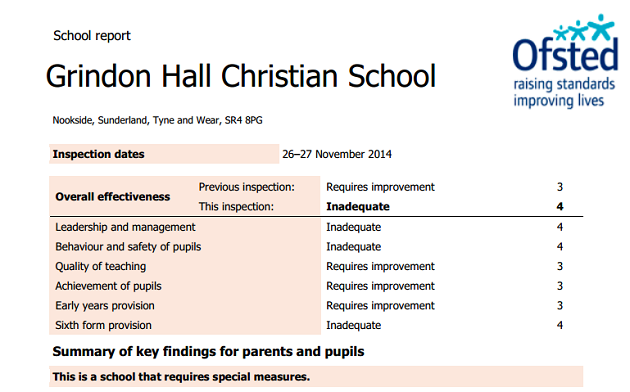 An inadequate free school is facing a forced takeover by a new sponsor in a bid by the Department for Education to bring about “swift improvements”.

Grindon Hall Christian School (GHCS) was put into special measures by Ofsted in November, with the inspectorate stating at the time that the curriculum was not adequately preparing pupils for life in modern Britain.

The school, whose inspection report was published at the same time as the now-closed Durham Free School, has since complained about the inspectors’ visit.

In its latest monitoring visit report, Ofsted said the Sunderland school was making “reasonable progress” towards the removal of special measures.

It is understood to be the first time a free school has been made to go down this route by the Department for Education (DfE).

GHCS now says it is unhappy with the DfE’s choice of sponsor, Bright Tribe. The school is worried about that the sponsor is based in the north west, and GHCS in the north east, and exam results of schools it currently runs.

The school said it would prefer to have the option of a local group to run the school or to work in an already-established cluster.

The founders have written to schools minister Lord Nash to express their concerns.

The letter said: “In July officials in your department started exerting pressure on the school to accept a takeover by Bright Tribe. We are told you believe that Bright Tribe is the “best fit” for our school. The threat of drastic action against us by the Secretary of State is implied if we do not comply.”

School founder Elizabeth Gray said they have no objection to a sponsor in general, but the choice.

She said: “Bright Tribe has complex financial and organisational arrangements, and has never run a 5-18 school. For these, and many other reasons, we have real concerns that need further investigation.

“We are astonished that the department is expecting a decision from the school without any documentation whatsoever setting out the terms of the arrangement, or any guarantees to protect our Christian ethos which delivers great results.”

A DfE spokesperson: “GHCS was placed in special measures in January following an Ofsted report that found issues with leadership, the quality of learning and safeguarding.

“It is also subject to two financial notices to improve. The Regional Schools Commissioner is seriously concerned about the school and has been exploring options for future sponsorship, including Bright Tribe, to provide the strong skills in financial management and governance required to bring about swift improvements.

“Every pupil deserves an excellent education and no parent should have to be content with their child spending a single day in a failing school. It is one of the great strengths of the free school programme that we can identify and deal with failure quickly, in a way that is not possible in all schools.”