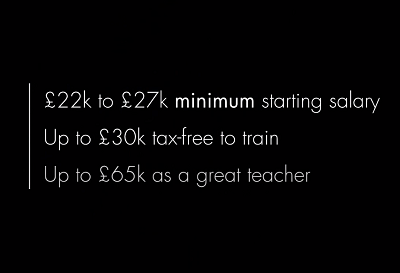 A ‘misleading’ claim that teachers can earn up to £65,000 a year in a government recruitment advert has prompted a complaint to the Advertising Standards Authority (ASA).

The watchdog has confirmed it is processing at least one complaint about the Department for Education’s advert, which was launched online yesterday and will air during prime time programmes such as The Jonathan Ross Show and Gogglebox over the next few weeks.

The complaint was submitted by National Union of Teachers executive member Martin Powell-Davies and relates to text at the end of the advert which reads “Up to £65k as a great teacher”.

Although government teacher payscale figures show that it is possible for leading practitioners to earn up to £65,978 in inner London, Mr Powell-Davies claimed the advert was “deliberately misleading” because such a “small proportion” of teachers actually earned that rate.

He told Schools Week: “The DfE is clearly deliberately ignoring the real issue, that we are facing a growing crisis of teacher recruitment and morale.

“Instead they have spent millions of pounds on an advert which is clearly deliberately misleading, because the proportion of teachers who actually earn £65,000 a year is absolutely miniscule.”

The ASA does not automatically launch investigations in response to complaints, which are instead assessed “carefully to establish whether there are grounds for further action”.

The watchdog said that it closed “many” cases after informing complainants that there were no grounds for investigation based on the concerns raised and assessment against the advertising code.

A spokesperson said: “If we consider that the complainant has raised a valid point and that the ad could potentially break the rules, we will contact the advertiser and ask for their comments. An advertiser may, at that stage, be able to provide evidence to immediately back up its claim and satisfy us that the rules haven’t been broken.

“In other instances, the advertiser may agree to amend or withdraw its ad without the need for a formal investigation. In those instances we consider the matter ‘informally resolved’ and close the case.”

He said if the advertiser disagreed with the complaint and wanted to defend itself, a formal investigation may be launched, operating a ‘reverse burden of proof’ principle which places the onus on the advertiser to prove its claims rather than us disproving them. A DfE spokesperson said: “Teachers have the potential to earn up to £65k and hundreds do – that excludes those in leadership roles who can earn more.

“Teachers play a vital role in raising standards and ensuring all pupils can reach their full potential. That is why we have given all heads much greater flexibility to set staff pay and reward their best teachers with a pay rise.”

The wording of the complaint submitted to the ASA

The advert is deliberately misleading as it focuses on the salary that teachers might expect to earn through its #teachersmake hashtag. It claims that a teacher may make ‘up to £65k as a great teacher’. In fact:

1) That amount is only available to a very few teachers in Inner London paid at the top of the Leading Practitioners pay range. It is not available across the whole of England and Wales. Most ‘great teachers’ would only be paid on the Main or Upper Pay ranges.

Given that the DfE is fully aware from its own data that the proportion of teachers who might expect to earn this sum is extremely small, this advertisement is creating a deliberately false impression of what ‘#teachersmake’ and should be withdrawn from circulation.