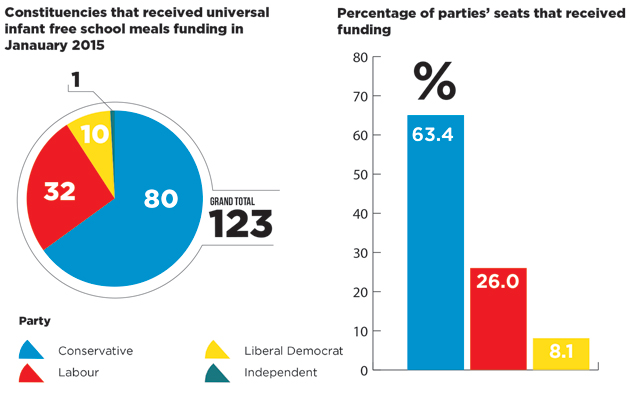 The Department for Education has defended its decision to give almost three-quarters of an additional £16.3 million for universal infant free meals (UIFSM) to schools in the constituencies of Coalition MPs.

A DfE spokesperson said the funding for the 123 schools selected from the more than 780 that applied was to “help schools that were unable to provide hot meals and no school that showed they were in that position was turned down.

“It is simply untrue to suggest it was allocated on any other basis. Making sure that children are eating a nutritious lunch at school will help to build a fairer society by helping children concentrate throughout the day and saving parents up to £400 a year.”

Analysis shows 73 per cent of schools that received funds to support the delivery of hot meals are in constituencies held by Coalition MPs. In total, 80 are Conservative, and 10 are Liberal Democrat. One school is in a constituency held by an independent, and 32 schools are represented by Labour MPs.

Ten schools in Buckinghamshire applied for funding and nine – all in Conservative-held constituencies – received it. Three schools in the highly marginal Conservative seat of North Warwickshire have been allocated funding.

In Oxfordshire, three of the five schools that applied for funding got it, all of them in Conservative-held constituencies. These included a school in the Witney seat held by prime minister David Cameron.

The flagship UIFSM policy was launched by deputy prime minister Nick Clegg at the Liberal Democrat party conference in 2013 – but there is no legal requirement on schools to provide a hot school meal. Notably, four schools in Sheffield – home of the Hallam constituency of Mr Clegg – were unsuccessful in their applications.

A number of schools identified by Schools Week applied on the grounds that they could not offer viable longer-term hot meal solutions, but had their applications turned down.

Lancashire applied for £235,652 for five schools – none of which received funding. Two Lancashire schools identified by Schools Week bid because the cost of their transported hot meals service was not sustainable.

Sefton Council on Merseyside put forward bids for 10 schools, but received nothing. A spokesman for the council told Schools Week that if the bids had been successful it would have reduced the need for some schools to rely on other schools to cook their meals.

One of the failed bidders was St Thomas Church of England School, in Lydiate, Merseyside. The school needed a minimum of £60,000, according to head Ann Lock. She said they had no kitchen where food could be cooked “and it would be preferable for us to cook on site each day”. Currently hot meals were brought in daily from a nearby academy. She said their unsuccessful bid had been “really disappointing – our children deserve the facility as much as other children”.

The costs of implementing the universal infant free school meals policy for the school had been substantial, and the money had to
be found from other budgets. “It cost us several thousand pounds. We had to move money around from curriculum areas to pay for a fridge, cutlery and extra tables and serving trolleys, and had to reduce our investment in IT.”

Schools Week did not find a school unable to provide any hot meals that did not receive UIFSM funding.

Questions have also been raised on the matter of transparency and imbalance.

Sefton Central Labour MP Bill Esterton, a member of the education select committee, said: “It seems that schools in more affluent areas are benefiting. There is a definite lack of transparency here.”

The original announcement of extra funds for UIFSM said that more than £24 million would be shared with schools.

According to the DfE, of the £8.2 million still available, £3.3 million would go to academies via the condition improvement fund; while £4.9 million would be allocated to schools through the UIFSM support service.

The service, made up of the Children’s Food Trust (CFT), and the Lead Association for Catering in Education (LACA), has been commissioned by the DfE to provide support and advice to schools and other stakeholders who provide UIFSM.

Andy Jolley, a former school governor and blogger who highlights problems with the introduction of UIFSMs, raised concerns about this new allocation process: “The scale of underfunding remains a real issue. We now have representatives of the catering industry prioritising the way £5 million of taxpayers’ money is spent, all without any transparency.”

Asked by Schools Week to explain the mechanism for distributing the £4.9 million, the DfE said schools requiring help could go to the support service that would refer the case to the DfE if it believed the school needed help. Allocations through this process would be announced in “due course”.

Learning of the outstanding funds, Mr Esterston said he would ask school reform minister Nick Gibb about the distribution of the UIFSM funds at education questions in the Commons next Monday and whether schools in his constituency could apply.

“The election is very soon – are we too late?”