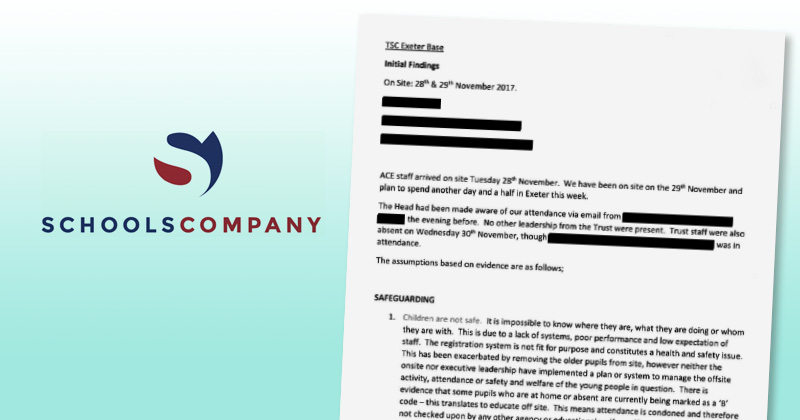 A school run by a failed alternative provision academy trust was deemed so unsafe it was told to remove its older pupils immediately, documents obtained by Schools Week reveal.

The school was one of three AP academies run by the Schools Company Trust, all of which have been rated “inadequate” by Ofsted.

The DfE, its Education and Skills Funding Agency and the regional schools commissioners are like the proverbial three monkeys who apparently see no evil, speak no evil, nor hear no evil of the academy programme

Schools Week has previously exposed scandals at the trust, including inflated reporting of GCSE grades and poor safeguarding, and a predicted deficit of £8 million at the end of last year. It is now in the process of being closed.

Heavily redacted correspondence between the trust and the government, obtained by Schools Week under the Freedom of Information Act, reveal the extent to which the academy was allowed to deteriorate before formal intervention in November last year.

Dr Mary Bousted, the joint general secretary of the National Education Union, said the findings showed that the “accountability” arrangements for academy trusts were not working.

“The DfE, its Education and Skills Funding Agency and the regional schools commissioners are like the proverbial three monkeys who apparently see no evil, speak no evil, nor hear no evil of the academy programme, despite evidence that is staring them in the face,” she said.

Lisa Mannall, the RSC for the South-West, sent a “letter of concern” to the trust in November last year. It revealed there were “serious concerns, particularly around the behaviour of the key stage 4 cohort and the risk associated with this for their safety and that of staff and other pupils”.

She recommended with “immediate effect” that KS4 pupils were removed from the academy, with “urgent additional” leadership support “imperative” to make sure their absence was not “protracted” and they had access to other education.  The pupils remained offsite until January this year and did not all return.

Mannall sent in an academy leader from ACE academy trust later in November, with its interim report exposing serious concerns about the safety of learners and the capacity of leaders at the trust.

“Children are not safe,” it read. “It is impossible to know where they are, what they are doing or whom they are with. This is due to lack of systems, poor performance and low expectation of staff.”

Primary school pupils were “locked in classrooms and do not have the ability to leave of their own volition”, the report said, describing it as a “restriction of liberty and a fire hazard”, while staff said pupils were allowed offsite at lunch unsupervised from the age of 11 upwards, despite the school having a large canteen and dining area.

It described claims of 70 per cent attendance as “spurious” and said the designated safeguarding lead “had no control over certain areas, which meant that she could not affect any change to safeguard children”.

The report said there were about one and half adults to every child onsite as staff  felt they could not manage more than 20 to 25 pupils in the school at once.

The leadership team brought “no added value” and the governing body had not had a chair since the summer term of 2017.

Devon County Council claimed it raised concerns directly with the government in March 2017.

The documents also show the trust was in expansion talks with the government in July last year, just a month before it was issued with a financial notice to improve.

It did not meet with the RSC’s office to discuss concerns until that November.

An interim trustee board took over in January, led by Angela Barry, an academy troubleshooter. In June this year it was announced the trust would dissolve, with its schools joining other trusts.

The RSC’s education advisers were told the trust took a 10 per cent top slice – the top end for how much trusts slice from their schools’ budgets to cover central costs – and staff suggested Devon County Council was not paying “the true cost of the extra pupils they claim to have on roll”.

The council said it had “nothing to add to our previous extensive statements”.

A spokesperson for Schools Company Trust said the failures of the previous leadership team were “unacceptable”, adding the interim team has done “outstanding work quickly and effectively”.

A spokesperson for the DfE said: “All academy trusts, including SchoolsCompany Trust, are subject to a rigorous system of accountability.

“The Education and Skills Funding Agency has launched a formal investigation into the SchoolsCompany Trust, which is currently ongoing. Once the investigation is complete, we will publish a full report with our findings on gov.uk.”