Increases in infection levels among children and young adults began around the same time schools reopened, but a direct link between the two is “unproven and difficult to establish”, government scientists have said.

A report endorsed by the Scientific Advisory Group for Emergencies, published today, found that although infection levels among young people started to increase in September, that growth may have started “before the reopening of schools”.

Since schools reopened in September, Public Health England figures show there have been more than 1,000 cases in education settings of two or more confirmed Covid cases.

But the report adds:  “There is no current direct evidence that transmission within schools plays a significant contributory role in driving increased rates of infection among children, but neither is there direct evidence to suggest otherwise.”

Although the paper said there was “low confidence” in this assessment.

While this may be indicative of a potential role for school opening, causation, including the extent to which transmission is occurring in schools, is unproven and difficult to establish

The SAGE report has been published alongside another document setting out the “benefits of remaining in education”, which concluded that school closures “put educational outcomes at risk”, impaired the physical and mental health of children and had a “particularly adverse” impact on disadvantaged pupils.

It comes as a debate about the safety of schools continues to rage on. The National Education Union has called for the partial closure of schools during the current lockdown, while headteachers’ unions ASCL and the NAHT have said they agree with ministers that they should remain open.

SAGE’s report found that prevalence of Covid-19 in school-age children had “risen significantly” in the first wave, and that the rise in prevalence was “first visible around the time that schools reopened”.

However, it said that while this “may be indicative of a potential role for school opening, causation, including the extent to which transmission is occurring in schools, is unproven and difficult to establish”.

Epidemiological data and modelling showed “signals of increasing transmission, and epidemic growth, in the wider population before the reopening of schools”, the report added.

The report also found that although teenagers have played a “significantly higher role in introducing infection into households” since September, transmission to children can occur in the household and the community as well as in schools.

It also pointed to evidence that mixing outside the home “continued to occur during school closures”.

The report also states that Office for National Statistics data “indicates that the transmissibility from children aged 2-11 and 12-16 is no different or very similar to that from adults”.

But, the rate at which children aged two to 16 bring infections into the household “was found to be higher than for adults”.

“For those aged 12 to 16 there was a marked increase in the period after schools opened.”

The report also looked at the risks to school staff, and pointed to ONS data which shows “no difference in the positivity rates of primary and secondary school teachers and other worker groups”. 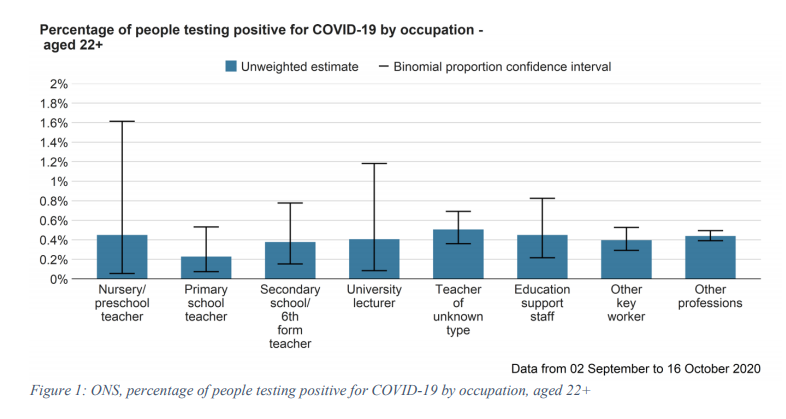