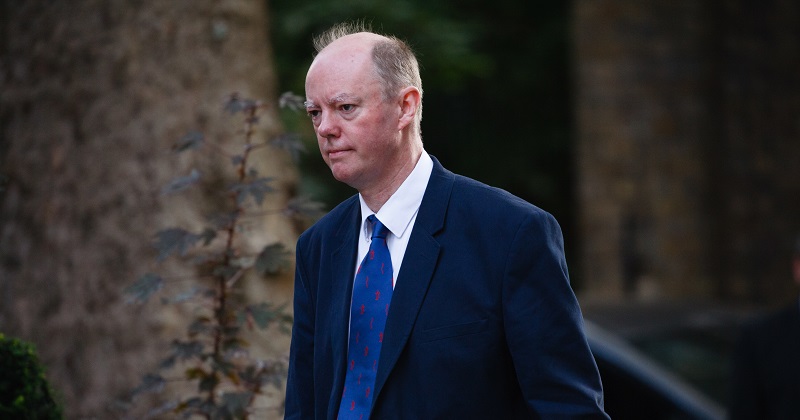 However, Professor Chris Whitty didn’t answer whether he believes the R rate – the transmission of the coronavirus – will be able to fall below 1 with schools remaining open. The government is yet to provide guidance on any additional measures for schools during the lockdown, but minsters have pledged they will stay open.

Whitty said there was “quite a lot of consensus” the transmission in primary schools was relatively small, with “more debate” about the role of secondary schools.

It comes as the National Education Union wages a high-profile campaign for schools to be closed during the national lockdown, due to start on Thursday.

The union announced today it has launched an app to make it easier for teachers to escalate covid concerns and take action in their schools, alongside a “major national advertising campaign across this country asking the constituents of MPs to ask them to #PutSchoolsInTheLockdown”.

However Whitty highlighted that, while the data was not “absolutely overwhelming”, international and Office for National Statistics (ONS) studies “do not imply that teachers are a high risk occupation, unlike for examples social care workers, medical staff and others who when they go into work have an increased risk”.

He said the rates of transmission by the ONS for teachers look “almost identical to the communities they are drawn [from]”. However he warned the data can “move on”, but said this was his judgment at this time.

He also repeated previous statements that the benefits to pupils being in school mean, on balance, “our view is firmly for children to be in school”.

NEU analysis of ONS data show the rate of coronavirus transmission since the start of September is 50 times in secondary schools (it has risen from 0.04 per cent to 2 per cent). The rise in primary is much lower, although it has increased nine-fold over the same period.

The union claimed yesterday over 150,000 teachers and support staff backed its calls for schools to be closed during the lockdown, with a rota operation then introduced in secondary schools.

Kevin Courtney, the NEU’s joint general secretary, said: “This Government has been cutting corners and taking half measures on Covid, and a second lockdown is the result. They have failed heads, teachers, support staff, parents and pupils.

“Schools, clearly, are an engine for virus transmission. The lockdown would be much more effective in reducing virus levels if schools and colleges were a part of it.”

But headteacher unions back the government’s pledge to keep schools open, with teachers also seemingly favouring moving to a rota system or educating fewer year groups – rather than full closure.

Whitty was appearing before MPs on the Science and Technology Committee today, convened to look at the evidence behind the new lockdown measures, alongside Sir Patrick Vallance, the government’s chief scientific adviser.