The British Educational Suppliers’ Association that she heads up is just round the corner, on the dingier side of the block. It’s her dream, she jokes, to start a day with breakfast in the café, pass through the curtains into the restaurant for lunch, and drift into the bar for the evening.

For someone who admits that her “main office is probably a branch of Caffè Nero” somewhere in central London, this scenario isn’t beyond the bounds of the imagination.

Wright spends most of her time in meetings, between meetings or travelling internationally – her most recent trip being a trade delegation to China with prime minister Theresa May. Her job as head of BESA is to represent the interests of the companies that supply schools with just about anything but people.

If you can’t afford to do the CPD, don’t actually buy the stuff

In its start-up days in the 1930s, that encompassed “pens and pencils, that kind of stuff”, but it eventually expanded to include publishers and, more recently, EdTech companies – which now make up about 50 per cent of its membership. Wright describes the organisation as “a mini CBI, solely focused on education”.

While my brain cogs whirr, trying to process what this means, she switches to a layperson’s description: “get a school, turn it upside down, take out the teachers and the kids. Anything else that drops out will be made by companies that work with us.”

She doesn’t believe the British education system gives itself enough credit in recognising all the wonderful things that are achieved in our schools: “I think we do ourselves down in the UK, but internationally we are still really, really highly regarded.

China, for example, has started looking to UK companies to work out how to teach resilience and emotional wellbeing, she explains. And we shouldn’t underestimate the value of popular EdTech products developed in the UK, such as the classroom behaviour management app Class Charts, the “Uber-for-supply-teachers” apps, or workload-reducing innovations like Show My Homework.

At a time when the government is piloting two regional school-procurement hubs, I’m curious whether Wright thinks they will help her members.

I think we do ourselves down in the UK, but internationally we are still really, really highly regarded

It’s a common complaint from EdTech start-ups that, when secondary schools have an average IT budget of around £70 per student per year, they can’t afford to negotiate deals with each individual school. But while she encourages schools to band together to negotiate better deals, she’s not sold on centralised procurement.

“Teachers are professionals, they make these decisions based on their own knowledge of what works in their classrooms. So, having a central person say ‘by the way, I’ve just bought 40,000 of these, and you’re going to have one’. You kind of go ‘right, and how am I supposed to use that?’ And if it’s not backed up with training and support, that’s when it doesn’t work,” she says.

“That’s when you hear all the horror stories about things being left in cupboards.” Even though she represents the industry body, her advice to schools on EdTech purchasing is simple: “If you can’t afford to do the CPD, don’t actually buy the stuff, because it’s just a waste. Unless you’re going to train people to do it effectively.”

The flipside of the fact local education authorities no longer take charge of purchasing is that there are now about 25,000 points-of-sale, which is unmanageable even for the largest companies. For this reason, she still considers peer-to-peer teacher recommendations the best sales route. With 80 per cent of school spend going on staff, procurement budgets are a huge issue.

An average secondary school will spend about £150,000 per year and an average primary £35,000. “That’s your Pritt Sticks, your consumables, your textbooks, your library books, the science equipment,” she explains. In this climate, she’s not averse to schools using creative means to supplement their budgets – even going so far as letting companies advertise to their audiences. 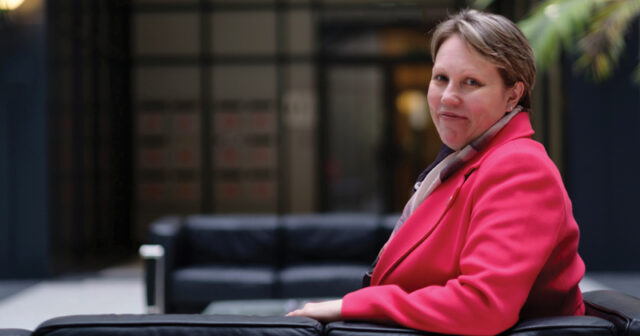 “If you are a local gym, then you’re doing a discount for parents of the kids of that school, actually why not? You wouldn’t want to see them doing something rotten. If it’s a tobacco company, obviously not. But if there’s something wholesome, that fits in with the school ethos. Quite frankly, I’d say don’t sniff at getting revenues from anywhere if you’re a school and you’re trying to get a budget together.”

The photographer arrives and is promptly told off for scouting the place for backgrounds to complement Wright’s bright pink jacket. No pictures are allowed, we are told emphatically, so we move to the rather less plush entrance hall to BESA’s office block, with its sad-looking palm trees. At this point Wright becomes visibly uncomfortable.

After 15 years working in communications, she’s much more used to organising press photoshoots for government ministers than starring in them herself. As the photographer arranges plants, lapels and stray limbs, we chat about her career to distract her.

For someone who admits that, on graduating with a degree in geography, she didn’t know what she wanted to do, she managed to follow an incredibly strategic career path.

“I never had a vocation, never had a particular desire to do anything very much,” she admits.

After a couple of years as a reporter for local newspapers in Essex, she landed a PR job at the Post Office. From there she sat the exams for the government communications service, with her first placement in the Department for Trade and Industry, “going on trade missions around the world, which I think plays in very nicely to what I’m doing now”.

Her next role was at Ofsted, as head of media and marketing, which was something of an ah-ha moment. “I’d been so used to organising, pretty much, men in suits to stand next to each other to smile for the cameras and things like that,” she recalls.

“And then going into the first classroom where I had the chief inspector and trying to tell children where to stand, I soon realised it doesn’t really work. That’s education, and it’s much more vibrant. And I haven’t really looked back since.” From Ofsted she moved to Partnerships for Schools, the Department for Education-funded body that delivers capital investment programmes, before spending five years at the DfE itself as director of communications.

Becoming a parent during this period brought her job more to life: “I kind of understood the policies and what they were trying to do, and the big picture. But actually, the experience of being a parent and having a child and going through their education has pulled it all together.”

By this time she was crafting her career with purpose: “I did some stints at the Cabinet Office as well because I thought I should so some sort of central government-y type stuff”.

She resigned from that role to take some time off with her young children and work independently, but almost immediately the director job at BESA came up. 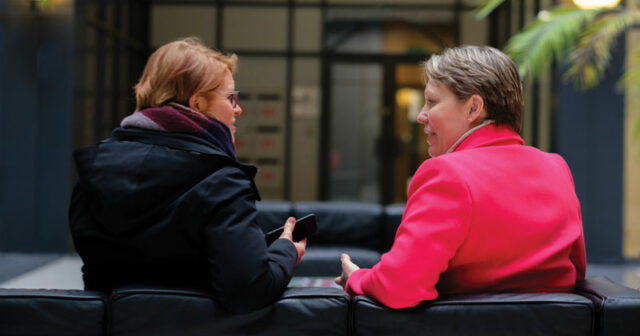 “It was perfect because it’s a mixture of helping schools, it is about helping raise the standards of resources so they help schools. It’s the international side. It’s a bit of communications, and every day’s different. Literally every single day is different.” That was in 2012 and Wright hasn’t looked back since. Her recent trip to China in particular was “really exciting, professionally and personally”.

“I was in the premium economy, which was absolutely a lot of fun. We were getting RAF gin and tonics, which was very nice. And the press pack was there, so it was really interesting being an ex-journalist, watching them.”

Despite her fellow traveller Theresa May’s reputation for an inability to connect with the hoi polloi, she appeared comfortable, relaxed, and even “very pleasant”, emerging from the VIP section to mingle with those sitting in business class and premium economy. She “even went right to the back of the plane, which I thought was really nice, to speak to the RAF crew”.

The delegation went to Wuhan, Beijing and Shanghai, where Wright linked up with Dulwich College and Wellington College’s international campuses to put on a VIP version of a demonstration classroom, exclusively for the PM. “I was really honoured,” she admits.

“We do something called ‘Our Great British Classroom’, which we take around the world, where we build a classroom from scratch.

So all my furniture companies send me their stuff and we actually build a mock-up class, where we would typically get a British-trained teacher and some local children to do a showcase lesson. And that’s much better than a typical exhibition stand.” As the camera is zipped safely back into its case, the deer-in-the-headlights look fades from Wright’s eyes and she becomes her immaculate, professional, very-together self.

After 20 years of putting other people forward, first government ministers, now education supply companies, it’s obviously the role in which she’s most comfortable.

It’s hard to pick one, but I’d say Wives and daughters by Elizabeth Gaskell. The author died before she finished it, and I kind of like that: you sort of think you know what’s going to happen, but there’s an uncertainty.

Which teacher influenced you the most at school?

Something that’s thoughtful. Actually, a colleague of mine who works at the Publisher’s Association, she gave me a book at Christmas, and she’d really thought about it and thought that I’d enjoy it. So things that have been thought-through.

If you could escape anywhere for a month, where would you go?

I think it would be rural France, with the sunflowers and vines. My mother-in-law’s got a place there. It’s just very relaxing, and your biggest decision is which cheese and which wine to buy.

What message would you put on a billboard?

Enjoy yourself and be kind.

Did your parents influence your career in any way?

I’ve only just realised it but I think actually my father was a big influence. He was a huge enthusiast of the first computers, so I remember on our dining room table – which my mum was never very impressed about – he’d built this Compukit UK101 kit computer which you’d make yourself.

It sat in this great big chipboard container which was literally half the size of the table. If we were lucky, it could change the colour of the screen. It was like the first home computer. He was a real enthusiast, and I grew up learning to do very rudimentary code, as a child would do. I think that has actually has come back as something I can really enjoy. I never realised it at the time, but yes, my father was an influence.

2006 – 2011: Director of communications, Department for Education

2005 – 2006: Director of communications, Partnerships for Schools

1999 – 2002: Head of strategic communications, Department of Trade and Industry