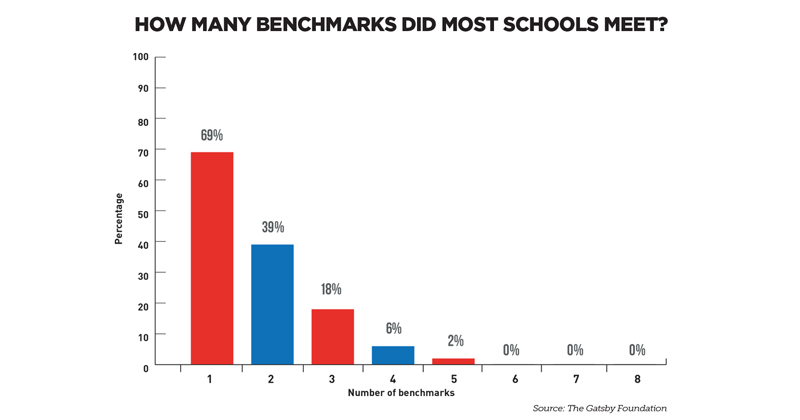 Eight “benchmarks” for careers advice will form part of new statutory guidance for schools, but the academic behind them has warned that they should never be used as an accountability measure.

Schools were given statutory responsibility for careers advice in 2014, but while Ofsted inspectors currently look for evidence that all post-16 routes are being promoted in schools – including vocational courses – the strength and quality of the guidance is not measured.

The government has confirmed that although it will update its statutory guidance to include the benchmarks outlined in the Gatsby Foundation’s 2014 good careers guidance report, it has “no plans” to make them a compulsory target for schools, after report author John Holman and school leaders expressed concerns about their use.

A new tool, supported by the Careers and Enterprise Company and unveiled this month by Holman, an academic at the University of York, will enable schools to rate their progress against the benchmarks and compare themselves with others.

Holman told Schools Week he had made it clear to the government he did not want the benchmarks to be used externally. He was “very pleased” that the government had been supportive of the benchmarks and “encouraged” that Ofsted inspectors seemed to be asking “the right questions”, but stressed that the eight benchmarks re simply a “useful” tool for schools to use internally.

“I have been quite explicit that we do not see it as an accountability measure,” he said. “I would be concerned if it was used like that.”

The benchmarks include the stability of school careers programmes, access to career and labour market information, and exposure to employers, workplaces and further education.

They also test how well schools address the needs of every pupil and link the curriculum to careers.

Malcolm Trobe, the acting general secretary of the Association of School and College Leaders, said the benchmarks were a “useful tool” but he would have “significant concerns” if the scores became part of a regulatory requirement.

“I can understand why school leaders have these concerns,” he said, adding that the government had a tendency to opt for a prescriptive approach, therefore creating a “box-ticking culture” in schools.

A Department for Education spokesperson said the government was aware that careers education in schools or colleges varied “hugely”.

“We are revising our statutory careers guidance for schools to include the eight Gatsby benchmarks, which reflect best practice.”

Holman, a well-known chemist who has become a prominent expert on careers education in recent years, said schools had demonstrated an appetite for an online tool after he released a report for Gatsby in which the benchmarks were first outlined.

At the time of the report’s release, 361 schools were asked to rate their own performance against the benchmarks. None felt they met even six of the benchmarks; just 2 per cent said they met five.

Since then, the new Careers and Enterprise Company has received almost £70 million to pay for mentoring and other schemes that link schools with businesses.

The pilot of the online tool is due to begin this term ahead of a nationwide roll-out in September.

The 8 benchmarks of careers education

– Every school and college should have an embedded programme of career education and guidance that is known and understood by pupils, parents, teachers, governors and employers.

– Encounters with employers and employees
Every pupil should have multiple opportunities to learn from employers about work, employment and the skills that are valued in the workplace. This can be through a range of enrichment activities including visiting speakers, mentoring and enterprise schemes.

– Experiences of workplaces
Every pupil should have first-hand experiences of the workplace through work visits, work shadowing and/or work experience to help their exploration of career opportunities, and expand their networks.

– Encounters with further and higher education
All pupils should understand the full range of learning opportunities that are available to them. This includes both academic and vocational routes and learning in schools, colleges, universities and in the workplace.

– Personal guidance
Every pupil should have opportunities for guidance interviews with a career adviser, who could be internal (a member of school staff) or external, provided they are trained to an appropriate level. These should be available whenever significant study or career choices are being made. They should be expected for all pupils but should be timed to meet their individual needs.